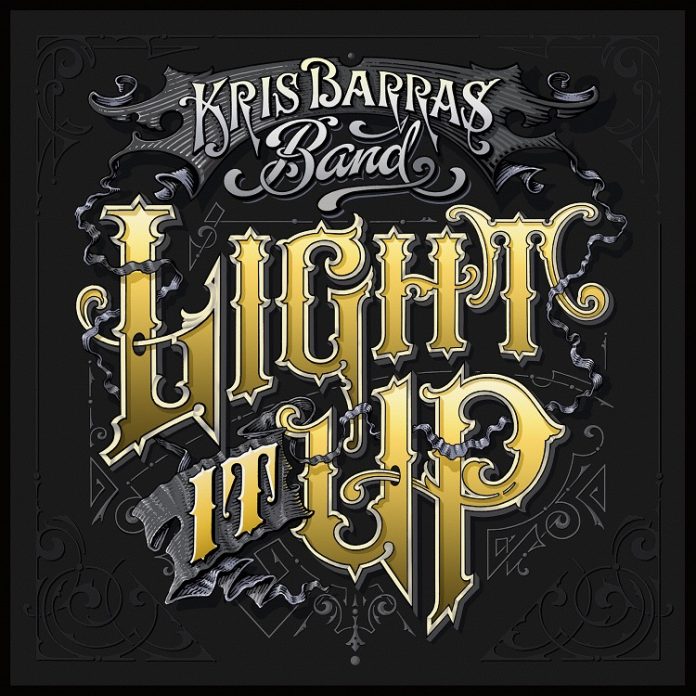 “From the first time we met, what you see is what you get….”

The hook line on the utterly glorious lead track on “Light It Up” it might be, but I am going out on a limb here and saying nothing sums up the career of Kris Barras better than that.

To be honest, if you wrote the script, no one would believe it. Even his own record company put it like this on the Press Release they sent with “Light It Up”.

The new album, it says: “follows a whirlwind 18 months since the release of ‘The Divine and Dirty’ in March 2018, where he sold 75 tickets for the London album launch at Thousand Island, and only 11 months later returned to play to 500 people at the main room of the Garage, London with an incredible ride to get there.”

Don’t believe them? Consider this. Cutting his teeth in pubs, covering ZZ Top a few years back, KB has now shared a stage with The Rev. Bill himself when he took over as frontman for The Supersonic Blues Explosion.

The thing about it is, howevero hard you work it ultimately wouldn’t matter if your music was no good, or it didn’t connect. On “Light It Up” the boys in the band – and this is a band – have hit the heights.

The 12 songs here single a change, though. Don’t worry, if you liked him before you’ll like him now and its not that he’s gone down some ambient path, but there’s a suggestion here that the sonic palette has widened ever so slightly.

“Broken Teeth” for example boasts some brilliant slide guitar – you sort of expected that, probably – but also a swagger, a hard rock polish, if you like. The soul-filled backing vocals of the type heard on “Gimme Shelter”, they weren’t on the debut record. They are now. It’s called experience.

The wonderful single he’s just put out, “Vegas Son” has a sort of Kenny Wayne Shepperd feel, and actually, the slight change on KWS’ recent records is almost mirrored on this collection too. “Ignite (Light It Up)” is built around a filthy groove, but also some mighty organ from Josiah J Manning (the Producer here too) and the brilliant “6AM” with its delta blues flavourings spoke to me, as someone who has his best ideas at 2am (ok, they’re mostly crap) its good to know that there are other insomniacs out there.

“Rain” is a change of pace. Southern rock, I guess. Sort of country, and with a sweet heart, “Counterfeit People” balances that brilliantly, with its catchy, soaring chorus. If Planet Rock isn’t all over this then there’s something wrong.

Barras is a brilliant guitar player, he really is. But he isn’t a showy one. “Let The River Run Through You” is supremely understated, and if you had to pick one where his time in SBE most shines through, then it’s “Bullet”, and the boogie of “Wound Up” is served with Tex Mex and there’s a little old band from Texas that is going to approve, believe me.

“What A Way To Go” with its cowbell, might actually be the best thing here, you can imagine Thunder doing it for one thing, which is fun, but it’s first line: “We weren’t born to pay the bills and die…..” is precisely why Kris Barras does this. He wanted more. He was just talented enough to make it happen.

“Not Fading” is more blues edged, but even here, its rock, rather than blues that drives this, really, and the more gentle, almost Mark Knopfler tinges of “Pride Is Forever” is the work of a four piece that on this, had almost total mastery of what they were trying to do here.

“Light It Up” proves the maxim that good things happen to good people.

I became aware of Kris pretty early on. And why? Because he very politely sent me an email with the music attached. So yeah, you’d best believe he’s paid his dues. There is – and I hope he doesn’t mind me saying this – a real sense of pride when I write these words. A real feeling that “our” boy has done good.

Light it up anywhere you want, stick it in neon lights if you choose to. “Light It Up” is the one that is sending Kris Barras and his band into the mainstream.

Rock’s hardest working overnight sensation is about to be a star.