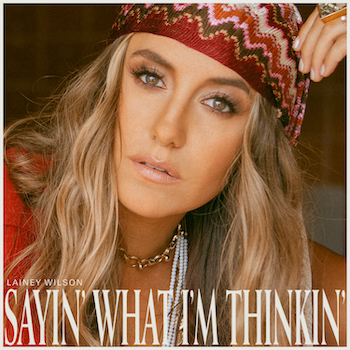 Lainey Wilson is primed for stardom. Simple as that. She’s on all the hot country “One To Watch” lists, her streams on Spotify number the hundreds of millions and her single “Dirty Looks” was a big hit. Add to that that she’s got Jay Joyce producing this (he is responsible for mega shipping albums by the likes of Eric Church and Brothers Osborne as well as Halestorm and Coheed and Cambria) and this collection clocks in at around 40 minutes, with pretty much every one solid gold pop music and there’s nothing here to suggest that Wilson isn’t about to live up to it, either.

Broadly speaking, you know what you’re going to get. Southern tales with a country flavour, big choruses, occasionally bluesy, and always with a defiant streak.

Perhaps the most overtly chart ready, “LA”, holds the key. “I am kinda redneck Hollywood,” she smiles, and before she’s done she adds in: “I ain’t been to California, it’s way too far from Georgia”. This is proud of its roots, and absolutely not going to take crap from anyone.

But, that’s only part of the story with Wilson, in fairness. Because she co-writes every one of these, and her lyrics contain much more feminism and empowerment than you might think.

It’s there right from the start, too. “Neon Diamonds” – the first song on the album – kicks off its honky tonk shuffle with the view that “my left hand ain’t interested in nothing but a drink in it”, as if to underline that she’s a free spirit.

“Sunday Best” with its strumming bass, might owe its sound to the Grand Ole Opry, but its lyrics are very much 2021, the ballad “A Man Oughta Know” (to be fair, I pretty much understand none of what a bloke should judging by these words) is obviously a single, but the interesting thing about LW is that she’s able to follow this up with the genuine threatening “Small town, Girl”. Look, don’t mess, basically.

“Dirty Looks”, I am guessing is the one. The anthem that will be the slow dance in the cowboy bars – but its cleverly done. “Pipe” by contrast was surely recorded with a middle finger in the air, a righteous rocker that TC3 no doubt would wish they’d written.

“Keeping Bars In Business” steeped in the small town, “Straight Up Sideways” is the Friday night one, the do it now and worry later one, if you will, and it’ll sound ace live, but the stomping glam rocker “WWDD” might be the most fun two minutes 21 seconds you’ll have this week. If you know what it stands for, you know.

In many ways, though, it’s the songs like “Rollin’ Stone” that will surely define Wilson moving forward. Folky, fearsomely intelligent and more to the point proudly independent, it is a mighty vehicle for her magnificent voice – not too far away from Hannah Aldridge.

The title track, sort of lurks plaintively in the shadows, but as she points out “I’ve only ever been who I am”, and that, really, is the album and the artist all in one. Skilful, and superbly crafted, but on her own terms and no one else’s, “Sayin’ What I’m Thinkin’” feels like a pretty definitive statement.