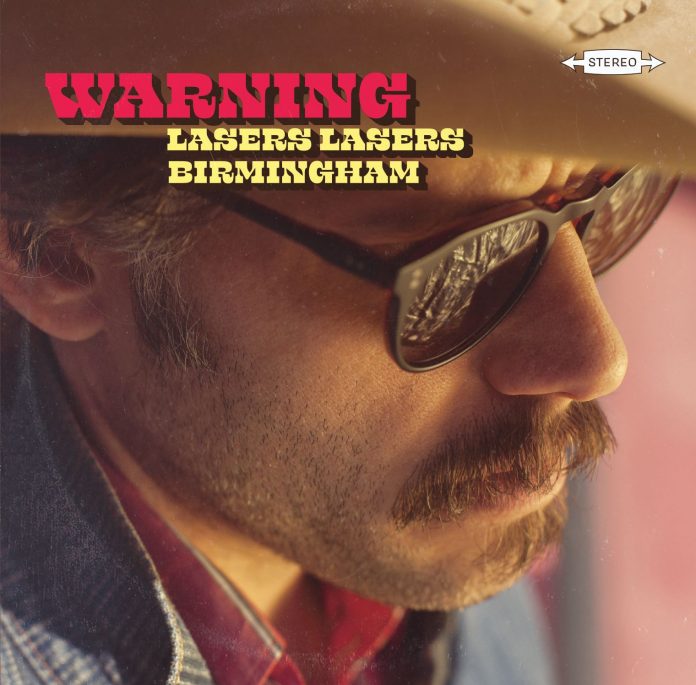 Alice Cooper always refers to “Alice” in interviews as a character. That makes sense, obviously, given the kind of depravity that one of the greatest things you will ever see live gets up to.

In a similar vein to that, I guess, Alex Owen – who along with a load of LA’s top draw of country talent is Lasers Lasers Birmingham – reckons something similar: “A persona can do all the things you can’t, the persona has more courage.”

But then, without wanting to get psychological about what is ostensibly just 11 country songs after all, don’t we all hide behind some kind of persona depending on the situation to avoid letting people know the real truth?

I mean, take the title track here. It starts this record and the first line: “oh this is a warning, that the wildest of frontiers are already tamed…..” seems to suggest that nothing  new is possible, and yet, over the course of the next 39 minutes it proceeds to debunk that idea, by offering some of the most original country I have heard in a while.

A little later in that first song – which also makes good on LLB/Owen’s claim to be “influenced by Pink Floyd” – he rather neatly gives a metaphor for the whole of this. “There is no John Wayne,” he chides. “no matter what they say.”

So, if there’s no cliched cowboy of yore, then the real clever bit is that he proves this by invoking a hell of a lot of country references that just about anyone with a passing interest in the genre would recognise.

“Perfection In 3/4 Time” is as classic as a George Strait number, but LLB deftly turns it into a self-deprecating thing: “the weed’s all been smoked, guess we’d better give the folks a show…..” while the pulsing throb of the bass to “After Party” is almost funky, and I couldn’t help thinking of the similarly left-field work of I See Hawks In LA here.

“Sugar Mama” proves that even the ballads are interesting. No “maybe, baby, we can be happy ever after” Hallmark crap. Instead “we fell to earth, to reality, and it hurt” amidst a discussion on whether being a kept man is a good idea. (I feel I should add that I am up for it, should any hot rich woman fancy really slumming it…..).

As much as this wants to play with the formula – and it does so excellently – then it is steeped in classic songwriting. “Lead Me On” is lugubrious and road worn, as well as having some lovely harmonies, while “Don’t Go Trying To Fix Me” even references the name “Jolene” in a duet that is probably the anthesis of “Stand By Your Man” and “Phantom Vibrations” doesn’t half have the heartbeat of a Waylon Jennings tune.

Much of this comes from the array of talent working with Owen including Dan Wistrom (The Magpie Salute, Ted Russell Kamp) on pedal steel and mandolin; Travis Popichak (Leslie Stevens, Gospel BeacH) on drums and percussion; Aaron Stern (Brian Whelan, Hamish Anderson) on bass; Jon Niemann (Miranda Lee Richards, Gospel BeacH) on piano, Hammond organ and Rhodes piano; Eleanor Masterson (The Mastersons, Steve Earle) on fiddle; Sie Sie Behoff and Davey Allen on backup vocals. There is enough there to ensure this would sound brilliant even if the songs didn’t match up. They do.

“Emmylou” is what country would sound like if Phil Spector made it, “Numbers And Figures” is actually a very clever series of wordplay’s around a bizarre love triangle, and “What A Shame” has the kind of deep rooted sadness that only a Lap Steel can give, albeit over a real rock chord.

He’s issued the warning, after all.