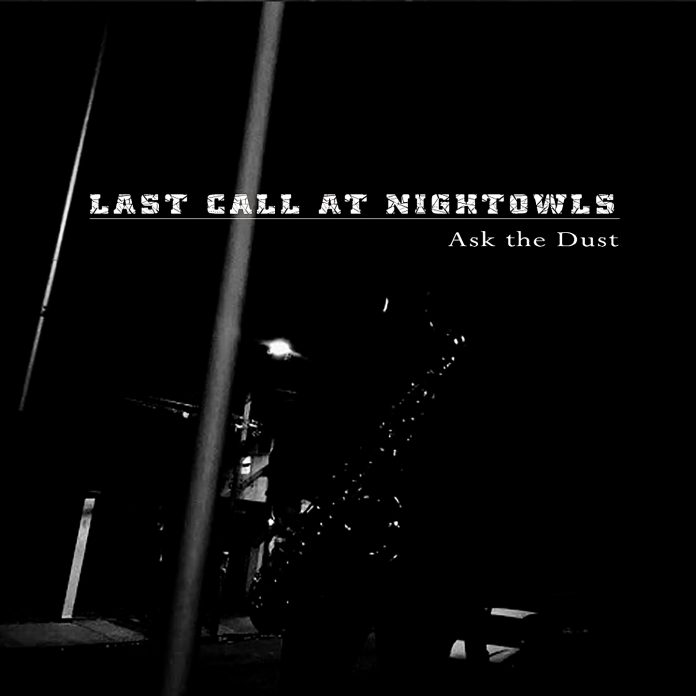 Donnie goes off-piste and looks into the world of Dark Jazz with international collective Last Call At Nightowls.

Last Call At Nightowls are an international coalition of Darkjazz, ambient and noir soundscapes. Three different continents provide the backbone of this impressive quartet.

There are moments that feel very cinematic on this album and moments where you can easily lose yourself in deep dark thought. Either way it is a stellar piece of work from a collective that keeps on challenging the listener at every turn.  To that end the opening salvo “Humeda” is a dark and forboding piece. It immediately springs to mind, well the mind of this whisky-soaked scribe anyway, the openings scenes of Martin Scorsese’s Taxi Driver, where the protaganist Travis Bickle is driving late at night in the dirty streets of New York hoping a real rain will come and wash the scum off the streets. Bernard Hermann’s chilling soundtrack has found an able companion in Ask the Dust.

The tenor sax of Maria Uribe is seductive as it is haunting. Never more so than on the rich “My Distant Dream”, a track that evokes moods and feelings rarely covered in four minutes before. One minute sultry another moment you begin feelings of isolation.

The album’s title track, which may or may not be taken from John Fante’s 1939 Depression-era novel where a young Italian-American struggles to make it as a writer in LA, but whatever the inspiration it has a beautiful flowing sax line that sways with the dark night breeze.  “La Llorona”, on the other hand,  is a darkly disjointed piece and the same could be said for “Sperm and Tears” both pieces have jagged and angular strides in amongst the serenity.

Ultimately the album is best described by the band themselves as “An obscure journey in the middle of the night for men and women, two saxes mark a slow impact, between dream and nightmare chasing the omens of the black owl”.

Ask the Dust is out now via Subsound Records

LAST CALL AT NIGHTOWLS are: