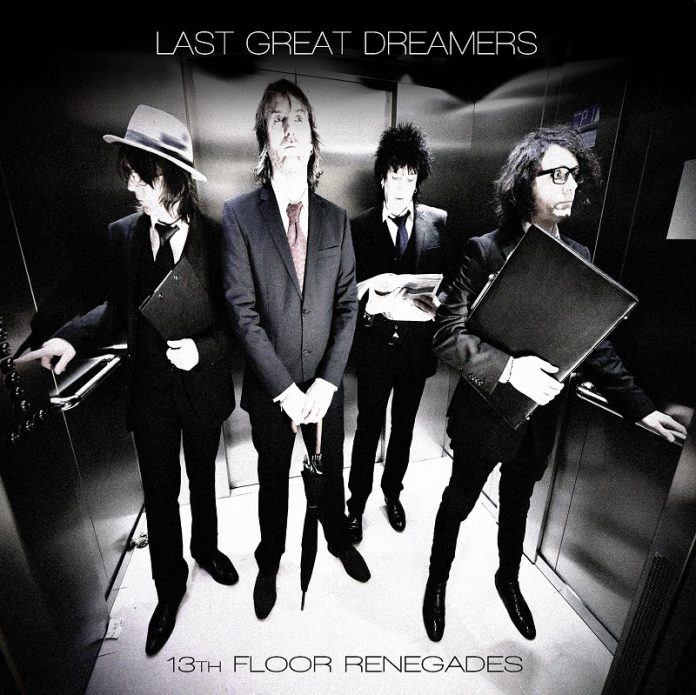 the academics probably have a word for it. Post-something or other no doubt, but whatever it is that is driving Last Great Dreamers to make up for the time they lost is making them very busy indeed.

Not content with never being off the road since they reformed, LGD are onto their second album of all new material in the pace of 18 months.

If you’ll allow us to have a stab at diagnosing the psyche of Slyder and Marc – the two men that straddle both their eras, maybe they’re capitalising on this because they can, because they know it was a damn shame they ever split in the first place.

Anyway forget that. As any football fan knows, the past is for looking back on when the present is shit, and in the case of Last Great Dreamers the present is anything but bleak. No relegation looming for them, they belong in the rock n roll premier league.

It isn’t that anyone is doing anything groundbreaking here, with due respect to the boys. The sound is – just like it always was –  still equal parts 70s glam mixed with the harmonies of Honeycrack, the leads of The Wildhearts and a whole load of the gift of Silver Sun, it’s more that it’s blindingly obvious that the quartet do it so very, very well.

In that respect the opener “New Situation” is not well named. This is not new at all. It’s just a brilliant Last Great Dreamers song. As full of beans as a three-year-old let loose in a sandpit, and happier to do damage, the uproarious nature of the sound is at odds with the bleak lyrics, but then it was ever thus.

The title track is a daydream. Look at that cover. They don’t want to do a crap job – hell, no one does – but like they say “we’re only gonna die for rock n roll” and why? Because nothing else matters, that’s why.

“Speed Of Light” is crunchy, but it also has a hypnotic quality too, there’s an Eastern flavour to “No Sunshine”, which like the opener belies its inherent sadness with a bubblegum fizz,  while “I Think I Like It” is the low slung sound of a load of blokes that most definitely love it, and there is a touch of Ginger’s solo stuff here too.

A record that was made in Oxfordshire with Pete (son of Joe) Brown, is not averse to the odd twist and turn either. “For Your Information” is what it might sound like if the Lightning Seeds went country, for example, but it is at its absolute best with the bit between its teeth.

To that end, it is at its absolute best on “Primitive Man”. Revelling in the fact they are out of touch, maybe, it is an absolutely superb song, and one that says – with a certain self-deprecation – that “I’ve got an analogue mind, I am not cutting edge.” That’s not actually true, but if they don’t write them like this anymore, then why not?

“Who’s Side Are You On?” worms its way in on the back of a phenomenal hook, and is unashamed pop music. Skilled, though, and “Miles Away” does a neat line in mid-paced as if to emphasise it, while “Broken Things” is like Ian Hunter on overdrive and moreover is the work of a tight, talented bunch.

Although the music might not always suggest it, “13th Floor Renegades” is frequently reflective, and “Going Home” ends the record in such a fashion. There’s another excellent solo – this is par for the course in fairness – but there’s a wistful dreaminess too. Dare we suggest, thinking of what might have been? What is, however, is yet another album from Last Great Dreamers that cements their reputation as the probably the best glam rock band making music today. They might be Renegades, but crikey they’re good at it.