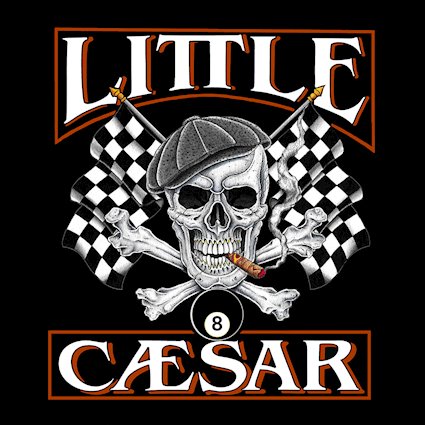 Too ugly for Hollywood? They’re back and know how to rock

Calling the album “Eight” tells some, but not all, of the story. Eighth album it might be, Little Caesar, you see, have been doing this for a long while. Emerging in the arse end of the 1980’s – when your then glam rock obsessed scribe remembers the buzz about a band that had the same A & R man as Bon Jovi and an album produced by Bob Rock.

Then, like so many of their peers, they laid low for a while after Kurt made sure the way youth wanted to be entertained wasn’t by anything entertaining at all (other controversial opinions are available) but then they reformed, with the usual two original members that most of these types of bands manage.

They’ve not been particularly prolific since, indeed, this is their first album in six years, but never mind the quantity, seems to be the motto, given that the songs that “Eight” contains are pretty ace.

Let’s be clear from the outset, there is no reinventing any wheels here. Much of “Eight” fancies a filthy boogie and has one right in front of you, but that is kinda the point in fairness. No one claimed they were doing anything cutting edge 30 years ago either.

Instead “21 Again” kicks things off with the air of a set of blokes who know exactly where the trouble is still, they just wish their younger selves had enjoyed it more, probably. Likewise “Mama Tried” is like a super-charged “Johnny B Good” – if Chuck Berry had been on death row it would have sounded like this – and christ, it is catchier than the flu.

That’s the first two dealt with, and if right now, you’re thinking to yourself, yeah that’s alright, but any Tom, Dick or Harry – or in this case perhaps, any Jackyl, Slaughter or Warrant?) can write a couple of bangers then pack the rest with filler, then you weren’t alone. However, we and you, were wrong because “Vegas” follows and it is the best thing here. “Too stupid for New York, too ugly for Hollywood” goes its chorus, and if it casts them as the outsiders, then crikey it suits them.

“Crushed Velvet” deals with addiction but adds a Stones circa “Gimme Shelter” vibe, while if anyone needs explanation of why “Good Times” rules you are probably reading the wrong website. The very essence of good time rock n roll is right here.

There’s even time for the token ballad, but “Time Enough For That” has enough blue collar dirt under its finger nails to be a cut above the norm.

It is, though, fair to say, that LC are happier when the pedal is to the metal and the horizon is getting closer, “Straight Shooter” is a plea for honesty – “is anyone out there on my team?” asks singer Ron Young, and there is an admirable truth in this sound. It isn’t trying to be anything it is not. It’s rock and it rolls. Sorted.

That’s not to say that isn’t done with huge skill. “Another Fine Mess” adds a piano that makes it like a cross between The Faces and the house band in the Sons Of Anarchy clubhouse, while the slide guitar in the wonderful mid-paced “Morning” gives it a real laid back feel, before the brilliant guitar solo kicks in and there is a glorious Cheap Trick-ish thing about “That’s Alright” before a brilliant change of gear at the end.

“Eight” has a cover that looks like it should be the design on the side of a hot rod and it is 40 odd minutes of fast fun and dirty frolics. “Nothin’ But A Good Time” sung Poison back in 88. 30 years on, Little Caesar think the same. The soundtrack to anything good you do is right here.