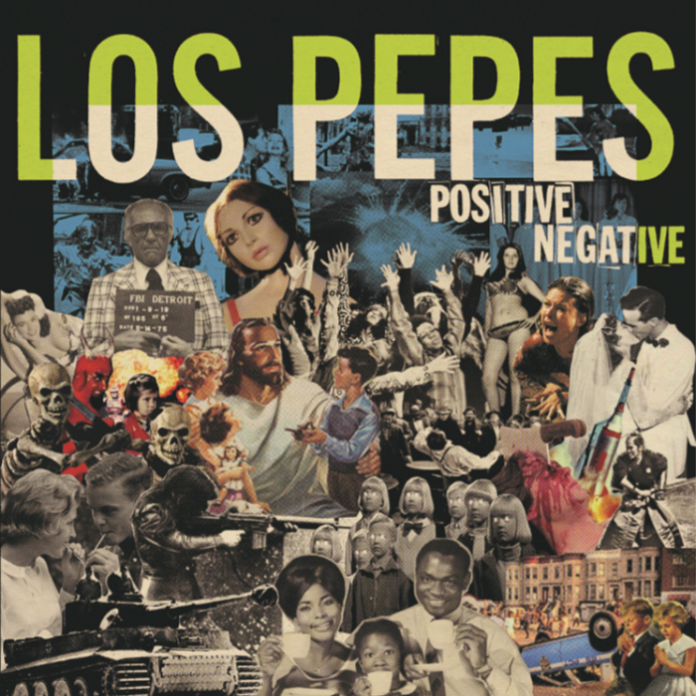 Originally released back in the spring, “Positive/Negative” is the fourth album from Los Pepes and it is now receiving a US release.

That bit, actually, leads on to the most surprising thing about all this. There will be those who are reading this  going “well, duh” but one thing I’ve learnt in my years doing this is never to lie about what you know and what you don’t, because whatever band you are reviewing is always someone’s favourite (even Shinedown and Alter Bridge, surely, must have fans somewhere, right?).

Here goes: Los Pepes are from the UK. Right here where I live and it took a US label to send me stuff before I knew about them.

They’ve been called “The Motorhead of Power Pop” and that’s a pretty neat summation of the 33 minutes here. On occasion punkish and pretty unpleasant – to wit, the opening song “Still Belong To Me”  – but also capable of some genuine sweet harmonies, like on the title track.

Mostly, though, the spirit of rock n roll is all over this. “Let Me Tell You Something” has a bit of The Sonics about it, while “Ain’t Life Easy” sounds like Chuck Berry jamming with the Hells Angels, or rather less euphemistically, the sort of stuff that Electric Frankenstein knock out for a pastime.

It isn’t meant as a criticism, either when I say these three things. 1) you’ve probably heard this type of stuff before 2) there’s not a lot of light and shade here and 3) Los Pepes don’t sound like a British band.

The answer to each one of these three points is actually the same. The five piece are playing what they love. It is that simple.

“Anyway” is every bit as catchy as all those Power Pop bands I review out of Boston, Wisconsin, wherever else, and if it is the most outwardly “pop” to go with the “power” then it still has the nihilism of punk rock. “I don’t care about it anyway,” sings Ben Perrier, “the world don’t bother me.” And why should it.

“We Need It” chugs along like you honestly think The Ramones might break out of your speakers at any point, “Medication” does it even faster, just for grins, “Think Back” has the air of one of the wonderful Silver Sun b-sides back in the day that you always wished they’d put on one of their albums and “Frustration” brings something primal out of Kris Hood’s drumming that is hard to ignore.

Ultimately, though, rock n roll doesn’t have to be PC. It needs to rock. And a roll helps cheer things up too, right? “Positive/Negative” is fun. Dirty, yes, but fun all the same.