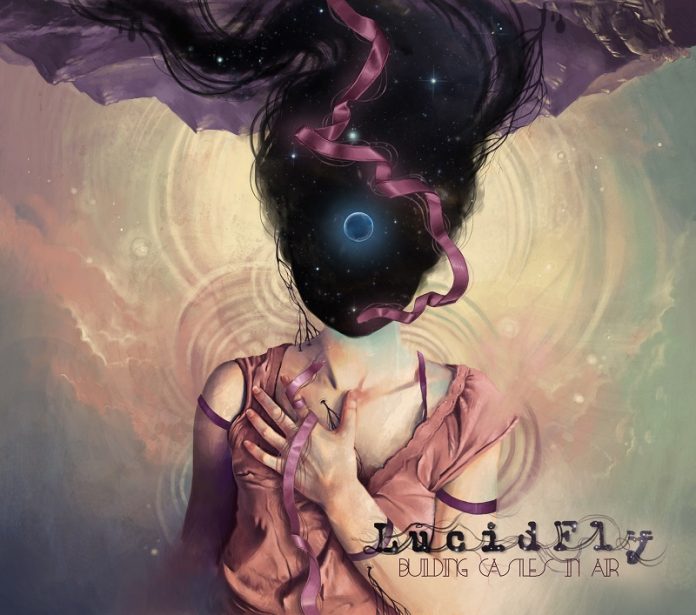 Pin this down if you can

On first listen, you could be damn near certain that Lucid Fly were one of the myriad bands coming out of Australia right now that are making interesting and huge sounding rock music.

It comes as something of a shock, perhaps to find out that LC are in fact from LA (having moved there from Florida) but then, the old Aussie thing isn’t too far away as a connection, given that it was produced by Forrester Savell, who twiddled knobs for Dead Letter Circus and  Karnivool.

And, as a starting point, that isn’t a bad one. Anyone who likes those bands will find much to enjoy here.

There’s another shock in all of this too. “Building Castles In Sky” is their debut full-length, following three EP’s and frankly first albums aren’t supposed to sound this polished or this good.

Lucid Fly will probably get lumped in with the Prog crowd by lazy people who are looking for a box to put them in (and were invited by Mike Portnoy to play Prognation) in truth, they are so much more than that – indeed like Polish kings Riverside, the band could probably take this wherever they liked.

There are similarities with Riverside musically too, particularly on the brilliantly lush “Visions Of Grandeur”, but there are so many twists and turns on this 11 tracker that trying to capture exactly what they do is like trying to nail water to the wall.

Sometimes, they get all these strands into one song. “Follow Through” kicks off with some seriously heavy pummelling, but has melodic verses, and a Pink Floyd ish eye on arenas – even better, there’s now 20 minute chin strokers here, instead everything gets wrapped up with relative speed.

There’s something knowingly understated about Lucid Fly. “Billowy And Broken” gives the appearance of a song that could rip your head off if it wanted to, its just choosing not to presently, but you’d best watch your step.

The album also pulls off the trick of sounding absolutely epic. Singer Nikki does a brilliant job on work like “Circles Into Squares”, while “Mascot” is a real highlight amongst many here.

“No I In Voice” comes from the lilting end of their repertoire, and if a lot of bands would wrap this up in all kinds bombast, then Lucid Fly get the balance just about perfect. Occasionally they lets themselves go a little and something like “Ribbons” occurs, while “Next To Strange” all of a sudden bursts out of nowhere with a big old riff and “Paperthin” which ends things here does so with an acoustic opening;

And that’s the key to Lucid Fly, they will go off in ways that not only didn’t you expect, you probably didn’t even conceive, which is why “Building Castles In Air” is such a gem. If this is them finding their feet then what follows might be truly superb.