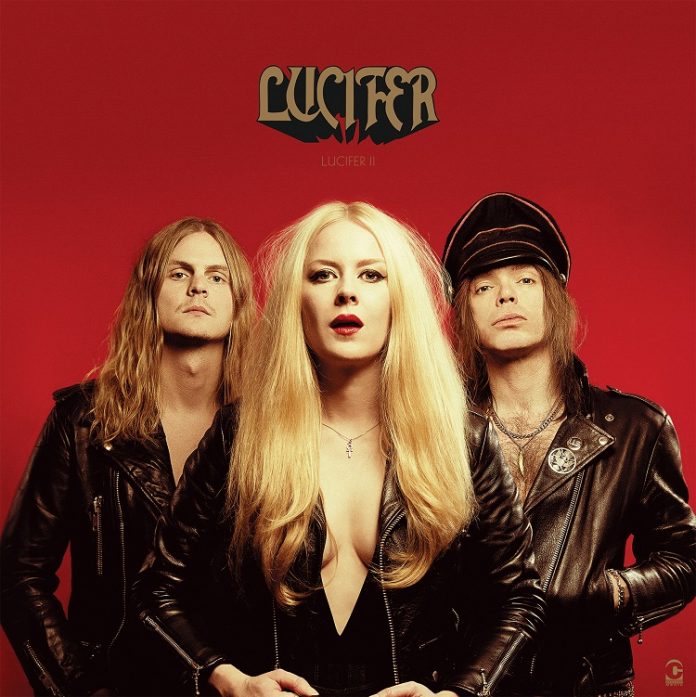 “Yeah, down in the graveyard where we have our tryst” – the opening line from The Rolling Stones, “Dancing With Mr. D” does, when you think about it, have the odd connotation or two. Here, when its sung by Lucifer’s frontwoman Johanna Sadonis, it sounds righteously filthy. Absolutely disgusting, and bubbling with some kind of occult brew that the easily scared should not touch.

All of which means that all is right in the world of Lucifer to be honest.

To understand Lucifer’s new record, you perhaps need to step back a little. In 2015, ex-The Oath singer Sadonis teamed up with Cathedral’s Gaz Jennings for an album that I concluded (and thus proved that no cliché is above use) that “the devil has the best tunes”.

Fast forward a couple of years and Jennings has gone, but in his place working with Sadonis, playing drums, bass and a lot of the guitar on the album is Nicke Andersson. Now, there are times when this website seems like it reviews an album involving Nicke every week, but his presence is always welcome, and for a handle on what he brings to the table just look at the cover. The three of them – Robin Tidebrink completes the trio and adds some formidable lead – belong to another time.

Indeed, because everyone here is so talented – for goodness sake, Andersson’s legacy is secure and Sadonis is so perfect a rock singer that she might well have been read the lyrics to Sabbath’s first album as a bedtime story when she was a kid – there is nothing approaching boring or trad about this.

Instead “California Son” has more than a hint of early Deep Purple about it, but this is a collection that doesn’t settle particularly, it never gets into the groove, rather preferring to float from thing to thing sprinkling gold dust (ok, it’s probably acid….) wherever it goes.

“Dreamer” is a real highlight, building magnificently and the lead guitar work here is worth buying the album for alone, while “Phoenix” crunches as if it were a Bad Company song, but only if they were tripping. The sparing use of keyboards and harmonies show that melody just comes natural to Anderson, and like many here this has the knack of sounding like it goes on for ten minutes, while actually clocking in at half that.

“Reaper At Your Heels” bounds in like something Blue Oyster Cult would concoct, coming on like a harder edged Purson, if you like, and somewhere, deep in the heart of Birmingham the sort of guitar sound that “Eyes In The Sky” has changed the world forty odd years back when Iommi did his thing.

“Before The Sun” has hints of Blues Pills about it, but with a mysticism that just fits. You’d call it a ballad, except it isn’t in the truest sense, but it sounds content and blissful as you like. Even better is the primal, Bonham-type drumming on “Aton”, which in common with many of the cuts here, meanders exactly where it chooses, always managing to find the right path.

That is equally true of the last of these. “Faux Pharaoh” which does all kinds of monolithic business, but still manages to be both a headbanger and a rock n roll song all at once, and crikey, when it lets itself go at the end, the closing solo is mighty.

It is fitting too that this only has nine songs. These type of albums should only ever have nine songs and they should fit on one side of a 90 minute cassette like the old days (kids ask your dad…..) Just another example, really, of the damn near perfection “II” contains.

The first was great, this is better. And thanks to Lucifer we’re on a highway to hell.