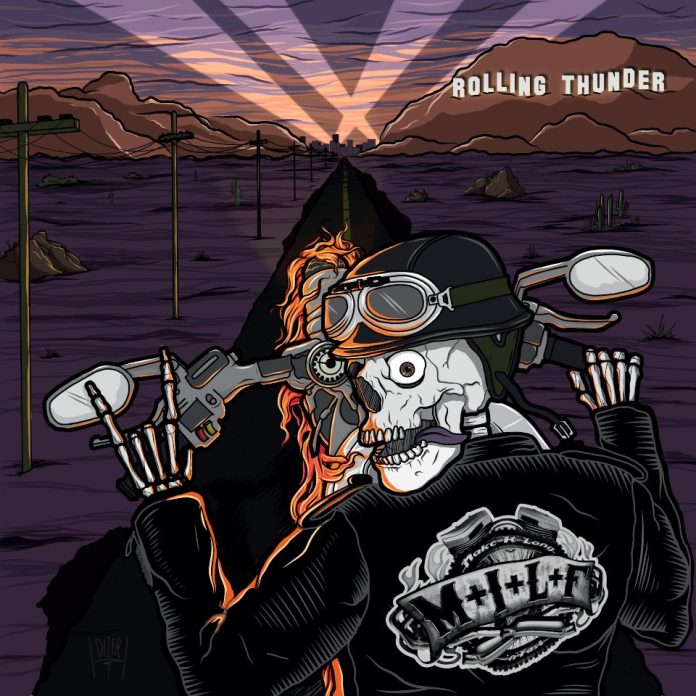 But the jewel’s in the dirt on that bill (if you will) as far as I am concerned are Poison, and if they make it to the UK, then count me in.

Of all the bands I loved as a kid, Poison, really are the only one I’ve never seen play live, but their influence on me cannot be overstated.

They had a longform video back in the day (anyone under 35 ask Siri….) and on it, their singer Brett Michaels talked about the importance of music to him, I paraphrase (as I haven’t watched the thing in about 30 years) but he said basically that music to him before the band, was an escape, that he came home from work, put on an album he loved listening to and forgot the world outside for a while.

I can’t really speak for M.I.L.F (it stands for Make It Long and Fast) but I’ll wager with you that it is for them too. “Rolling Thunder” is the second album from these Italian reprobates, but its heart is on the Sunset Strip in about 1986, and you best believe they are dreaming. Dreaming of being their heroes.

And those idols? Well come on, it’s not rocket science. Look at the band name for goodness sake, and then there’s the last track. A cover of “Mama Kin” that owes more, actually to the GnR version than the original.

Across the other 11 songs here, there are elements of all of those.

“Hottest Dream” is about the most authentic sleaze rock I have heard in goodness knows how long. There is one thing that stops it being dated (and this is true for the whole record, to be fair) and that’s the sheer joy with which they do it.

“Sell Your Pills” is even a little bit bluesy, and the twin guitarists of Zip Faster (possibly my favourite rock name in years) and Luca Ferri “Ciccio” ensure this packs a real punch. “Babe” gets cowbell bonus points as Mirko Bernardi thumps things, and the bass groove of Andrea Devoti is absolutely filthy.

That’s pretty much the tone set for the rest of it, in truth. “Blame It On The Vodka” out Airbourne’s Airbourne, “Last Hand” does the proto -metal thing that early Motley used to do so well, “Peace Of War” moves away from wine, women and song – and if a more mature thing is your bag then this is your entry point. It is a decent example of the band finding their own voice too.

Thing is, for my money, if I am honest, they are better when they are doing things like “Unleash The Beast” – unapologetic and just happy to ride their bikes into the sunset. No helmets, naturally.

There is (thankfully) nothing approaching “Every Rose Has It Thorn” here, balladry would sound false and there is nothing false here. “Crazy For Love” broods, sounds a bit desperate, but you know deep down that they would cheerfully shag her sister instead, while “Inner Fire” makes rather good on those Cult ideals, sounding like it has listened to Sonic Temple a lot.

The last original, “Bad Boys” is actually why this album rules. It sounds like a division one copy of GnR, but that’s not the point, you just know that if Simone Galli wasn’t fronting this band, he’d be listening to them.

Like he says himself in the second verse: “We’re not in the 80s anymore, but I don’t care.” That’s all you need to know.