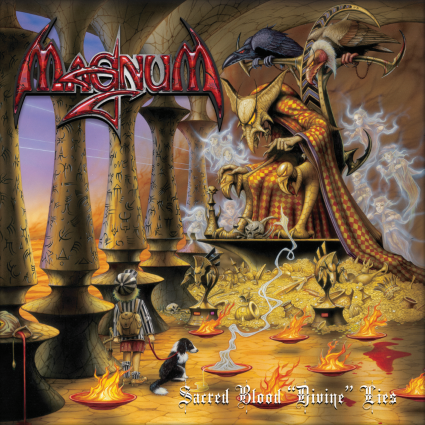 Even allowing for their own stellar career, and even allowing the string of incredible records they’ve released since finding their feet in spectacular style again with “Into The Valley Of The Moonking” in 2009, you do wonder if Magnum cast envious glances around the rock n roll landscape from time to time.

“Sacred Blood ‘Divine’ Lies” is their fifth studio record in those years and when you chuck in a live album or two and seemingly never ending tour dates, it’s been a busy period. Unlike some of their obvious contemporaries from the late 1970s, though, there’s not a private jet to tour with, there’s not a magazine cover when they release a record. What there is instead – and maybe this is why they are content – is a stellar body of work and a loyal fanbase who packs those gigs our time and time and again.

And make no mistake “…..Lies” their 19th studio album by MV’s count, is merely a continuation of the superb last couple. Even main man Tony Clarkin thinks so, believing that the record is destined to be looked back on as one of the bands classics. There’s a suspicion that he might be right.

The clue has to why comes in its magnificent opening quartet. The title track does that grandiose without being pompous thing that no one does quite as well, as Clarkin takes early centre stage, delivering an ominous riff. They follow it up with “Crazy Old Mothers” which begins with some tinkling pianos from Mark Stanway – and really there are few, if any, bands that use keyboards this well. There’s a suspicion that the slamming chorus is their own wake up call, certainly there’s a glint in vocalist Bob Catley’s eye when he sings: “come on you crazy old mothers, let’s get in trouble tonight.”

Arguably, what comes next is even better. “Gypsy Queen” inspired by a trip to Russia, has a real epic feel – but like everything Magnum do it never feels dense and impenetrable. It’s followed, though by a real highlight. “Princess In Rags (The Cult)” is surely destined to be a real live favourite, with its mighty hook, superb solo and stellar drumming from Harry James.

Not that the rest of it is shabby. In fact, the rest of it verges on the brilliant too. Whether its the massive balladry of “Your Dreams Won’t Die” or ever so slightly – but wonderfully – OTT stuff like “Afraid Of The Night” and “A Forgotten Conversation” this is almost the perfect snapshot of where this band are in 2016.

If most bands at this point might be tempted to rest on laurels and coast through life doing the odd greatest hits tour, then there’s no hint of that here. In fact, this is nothing more and nothing less than a confident, classy outing from one of Britain’s finest bands.

That boy Clarkin, you know, he’s not a bad judge.