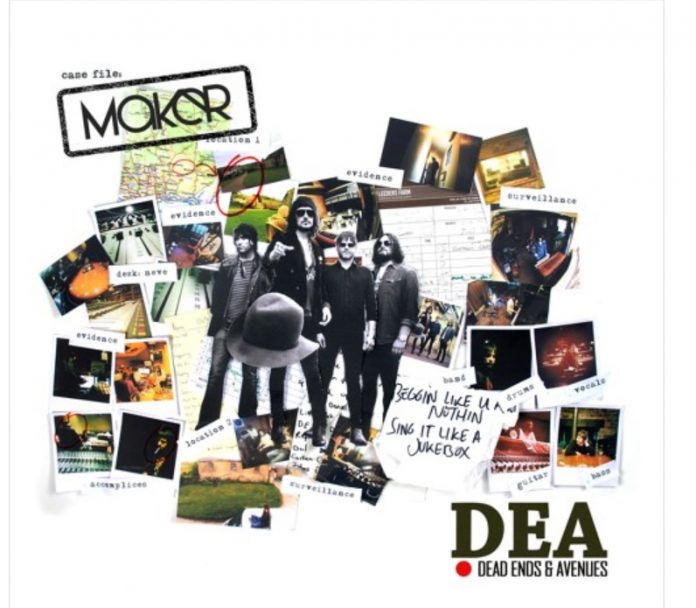 Rewind a year or so and an email arrived in the MV inbox. A Kent band called Maker had – they said – caught a review I’d done of a band they’d supported, and would I like to review their debut EP too. It’s the type of email that arrives every day and most (sorry) due to time issues, get ignored. Maker, though, had something different. They had great songs, they had a singer in Alessandro Marinelli that was like some soulful version of Chris Robinson and they had the talent and ambition that so many of their peers lack.

What they also had was a second EP, which rather merrily proved that the debut wasn’t a fluke, and now they are ready with “DEA” their first full length. Where most bands of this type struggle is with fleshing the ideas that made their first few EP’s special out far enough to make a “proper” record.

For a start, there are only a few songs on this that you’ve heard before. “Dead Ends And Avenues”, Move Your Feet” and the brilliant ballad “Girl, Quit Your Crying” (with its piano coming from the exact instrument that Oasis played “Don’t Look Back In Anger” on) are all here, and all sound as superb as they did before, but it’s the talent on the others that will get people really excited.

The thing about Maker is that they have something classic and instantly likeable. So even if you have heard plenty of songs like the opener “Soul” – and let’s not kid ourselves, plenty exist – there is still something fresh about it.

There is something, too, of the Temperance Movement’s attitude about them. Like TTM Maker are a band that would Classic Rock but have more crossover potential than that too. Working with producer  by Nick Brine, who has twiddled knobs for The Stone Roses, Oasis, Teenage Fanclub, Imelda May, is a clue to the differences in the sonics from many bands we review on these pages. Brine had them holed up for 14 days in the iconic Rockfield Studios in Wales and the results speak for themselves.

There is an effortless, cool air about “Quick Getaway” which comes from the way that keyobards  which are almost funky – meld with the tones of Alessandro Marinelli, but the record has more to it than mere stomp and bluster. There’s a country feel to “John’s Pharmacy” coupled with a blissed-out mood that hints that whatever is on sale there, you aren’t going to find it over the counter in Boots.

Maker can just rock n roll when they need to. “Curtain Call” is simply the finest song The Black Crowes didn’t write, but they offer more, which (like Crowes to be fair) may become evident as their career progresses. “Soaked Up” is awash with some interesting rhythms and sounds that owe a debt to bands like Gov’t Mule rather than anything modern, with brothers Andrew Donaldson (guitar) Gavin Donaldson (drums), plus John Austin (bass) right to the fore (Gavin Donaldson previously managed Liam Gallagher’s flagship Carnaby Street Pretty Green clothing store, fact fans).

There is an air of contentment throughout much of this, but particularly on “Comin’ In From The Rain” while there are Lord knows how many Americana bands in the Mid-West, who would kill for the licks on “Get Me Through” and if the thought that they would turn into a jam band at a moments notice given half the chance is never far from thoughts, then you’d best believe that “She’s On A Replay” ain’t gonna be rushed for anyone.

They end with a “(A Little Bit Of) Soul, a country-tinged reprise of the opening song, as if to signpost their two sides. It will be interesting to see which one of these wins the battle for supremacy as the band progresses.

That’s for the future, though, the present is enough to tell you that with “DEA” Maker are more than making good on their potential.