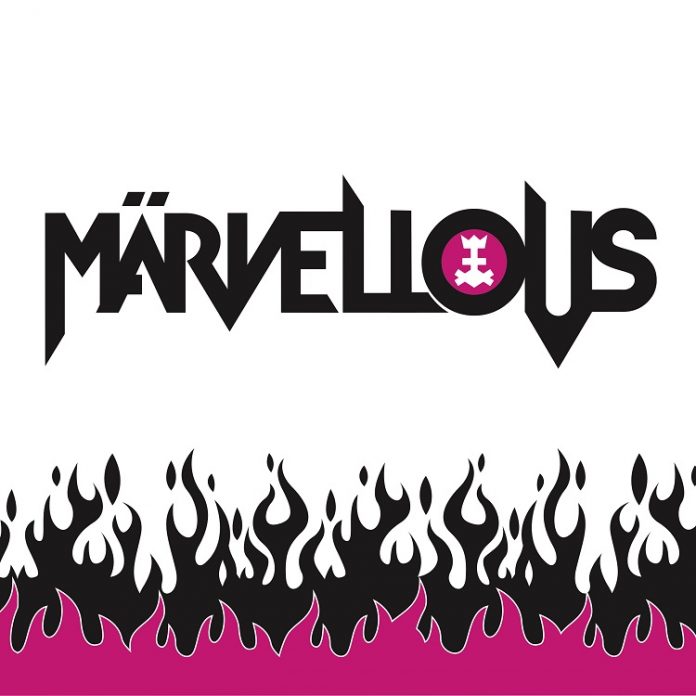 The best thing about running a music website? Easy. The exposure to all kinds of music you didn’t know before.

In 2017, a band called Märvel crashed onto these very pages with their EP “The Hills Have Eyes”, which saw some early stuff re-released and a couple of covers. Immediately I start wittering on about The Hellacopters, The Backyard Babies, and Kiss.

Then there was a full length record, and I added some Thin Lizzy comparisons to the mix. Then, finally last year they did a covers record. “Guilty Pleasures” was not only ace, but had a version of “Powertrip” by Monster Magnet (possibly the most rock n roll song ever written) and made it even more fun.

Which brings us to the present day. Kind of. Because “Märvellous”, although new recordings, is actually their debut EP, from 2002.

The story of the band is interesting, as although Swedish, they were formed in the US on some student exchange programme, and this is the four songs that started them on their way.

Now as the band point out in interviews: “Have you ever heard the songs from our debut EP? No – not until today you haven’t!” I can’t make comparisons between Märvel then and Märvel now, what I can say is that 2020 Märvel are – along with Backyard Babies – the finest thing in Sweden.

“Amaze-o” the almost instrumental thing that starts this off is shiny and glorious, and I’ll bet shows back in the day used to start with it. And when The King pays the solo in the middle, there is such a glee, such a love for their music that you can’t help but reckon the claim on their website that the band “is their true calling in life” might well be right. And if that’s not enough, they do rhyme “polished turd” with “theatre of the absurd” here, which is beyond glorious.

There is a gift for melody on these. The title track is aptly named, the harmony on the backing vocals, the guitar sound, its all there even then, and it’s not hard to see how three guys from Åtvidaberg were signed by a US Label even before they’d got home.

Let’s be honest, the taste of Kiss is never too far away either. “Public School 75” could have come straight off “Destroyer”, but it’s not like they are hiding it, and the truly wonderful “Taste Of Platinum” (the one I did know, because it was on their debut record too – which I listened to after reviewing them a few years ago) shows the chemistry that the aforementioned King, The Burgher (Bass) and The Vicar (Drums) have.

This is like the title says. But it’s more. Like their tag line on a Google Search puts it, they are the barons of High Energy Rock n Roll.  The more and more I hear of Märvel, the more and more I think this: those of us that never truly got over the demise of The Hellacopters (and I joined record clubs just to import their stuff….) have a new favourite band.