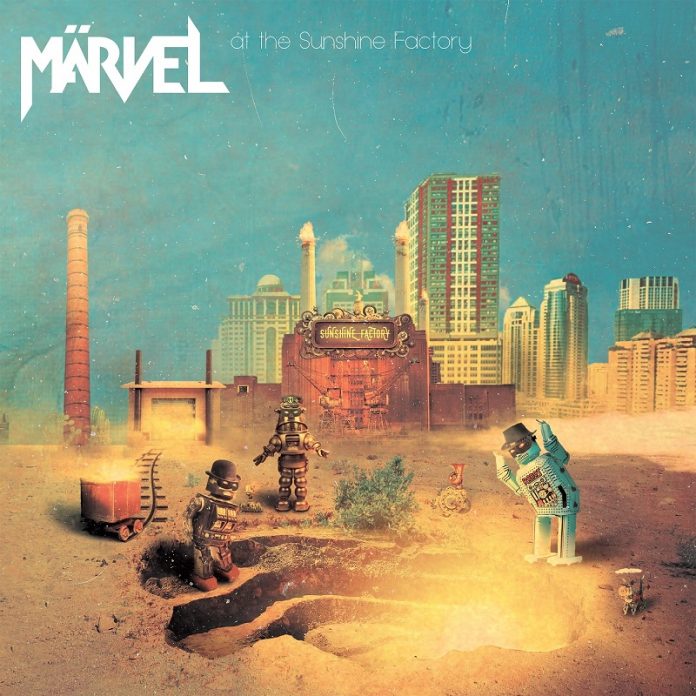 The new one has got heart and balls. Literally

After re-releasing some of their earlier work – the phenomenal “The Hills Have Eyes” EP found its way onto these pages – the time has come for Marvel to give us something new, and its right here with “At The Sunshine Factory.”

Musically the 12 tracker lives up to its name, right from the start, “A Killing View” shimmers with acoustic glee, and even if, in common with the EP it sounds like “High Visibility” era Hellacopters (a lot of this is to do with the fact that singer King has a similar style to Nicke Andersson) then that’s never been a bad thing,

The album, however, finds many more areas to explore than the EP did. The thing about “….Factory” is that if you peel away – or indeed ignore the overt cheeriness of the sound – then there’s a darkness here. But then, consider this. Lou Reed’s “Perfect Day” was about heroin and still managed to be used as a Children In Need charity single. In that context, then, the overt pop stylings of “The Secret Grand Prix” don’t sound too bad, huh?

The best thing about this beautifully crafted stuff is that it can be enjoyed on many levels – mostly because King is the master of the catchy riff and Burgher and Vicar on bass and drums respectively have never knowingly overplayed.

This is the perfect power trio. “Goodluck Sandy” is unashamed and a slice of pop music with a hook to kill for – even if the pay off line “I would rather be a lover than a friend” shows its true intentions.

It can rock harder too, “Heart And Balls” channels some fast track to the inner workings of Thin Lizzy’s “Jailbreak” (which for clarity makes it very good indeed) and “Smile Mr. Steen” swaggers and thumps with a funkiness, but in common with everything here it possesses a chorus that will drive you insane.

Whatever they do, though, Marvel are always interesting. “Monsters Grow In The Dark” is almost post punk as it pulses, while “Child” sounds like the kind of angular rock that MV early 2000s faves Wilt used to do for fun. And another sugar coated pill of “Step Closer” offers that “I keep seeing hope where there is none….” And seems to sum the mood up here.

You do get the impression that for all the twists and turns Marvel’s stock in trade, though, is pure rock n roll. “All Over The News” has a touch of their fellow countrymen Grande Royale’s recent album about it, and in turn is one of the best things here.

Kiss are a key influence, and “Live And Learn” makes that totally explicit, “Vinegar” is a contrast, and is probably one of the heaviest cuts here – but still makes itself at home with another seemingly effortless chorus.

Ending with the album’s sole ballad, “Angela” takes “Sunshine Factory” somewhere else entirely. Instantly they are a West Coast pop band from the 1960s, and The Byrds would be proud of this.

Three-piece bands often have the best balance and some of the brightest ideas. Marvel are no exception. A record that, given a couple of listens, will reveal its true majesty. Time spent “At The Sunshine Factory” was clearly very industrious indeed.