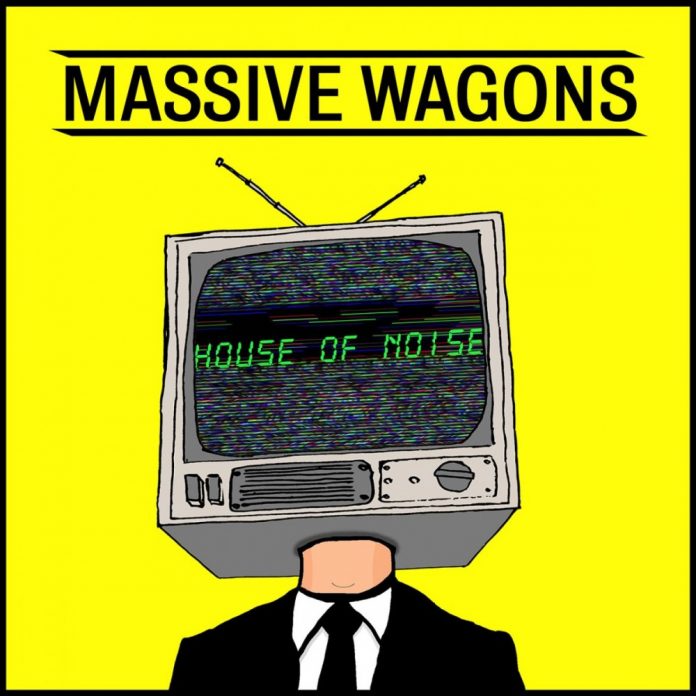 The second song here, on “House Of Noise” is called “Banging On Your Stereo”. It follows the Massive Wagons template to a large extent. It is big, brash, catchy and unashamed of any of those things.

See, this isn’t a band that wants to be avant-garde, cutting edge, or any of that tedious bullshit. They are not a band who ever, you imagine sat round wanting to push the boundaries. They are pure and simple, the purest and simplest rock n roll band around.

No heirs and graces, no extraneous fat. Just a desire to entertain. Remember entertainment? So do MW:  “big riffs, big licks, and drive them crazy, we’re bringing the big show back to town.” Is more than just a line on album opener “In It Together”. It’s the band laid bare. Their mission statement, if you want.

As is this: from the huge title track. “I am just smashing my face into another tomorrow.” News flash, chaps. Massive Wagons paid them dues long enough. They are taking what’s theirs and they’re taking it now.

Their last one, “Full Nelson” crashed them in the charts. This one is keeping them there.

Bombast? You want it? You got it. It’s called “Freak City”. And deserves to be number one in about 25 countries – either that or the UK entry to Eurovision, it’s a fine line being walked here. It’s just they walk it so well. Take “Hero”, everyone in the world can spot its an AC/DC riff. But the thing is enormous. “Rock Of Ages” Def Leppard big. That’s big, right?

But then in the next breath there’s “Professional Creep” with its metal edge (and it rhymes “Meryl Streep” with “Luncheon Meat physique”) and “Pressure” which is basically a fizz bomb (and you imagine from bitter experience)  of almost punk rock that lays their current confidence bare.

The genius here – and I don’t use that word lightly – is in stuff like “The Curry Song”. Now, I am not going to lie here. It should be shit. It really should. The first time I heard it, my immediate reaction was “what the hell’s that?” The second, I am shouting “You say Rogan, I say Josh” with the best of them. That’s what MW do. They sweep you along. You can’t resist them if you have a pulse.

The classics just keep coming. “Glorious” returns to an old hobby horse, about people online criticising bands: “Dave, Dave, behave, you’re missing the point, my friend” is the withering putdown here, but the brilliant 90s sound of “Sad, Sad Song” is, even for this record, catchy. You can imagine, just about, Honeycrack doing this, if they were a metal band.

“Hellascrewya” is built on a huge bass groove and gets bonus points for the Thin Lizzy-esque twin solo, as well as being a middle finger to some bloke who walked out of one of their gigs. The last one, “Matter Of Time” is an eight minute long statement. It builds like a GnR song on the Use Your Illusion” records, but more than that, it shows the sheer depth of the skill here. There’s a reason Massive Wagons have broken out of the underground scene they were in so long: they were just too good not to.

Just over a year ago I went to watch Lynyrd Skynrd. Status Quo were special guests. There was another band on before them. That band was Massive Wagons. Now, there is a sonic similarity between the Lancastrians and Rossi’s boys (especially if you add in a touch of The Wildhearts too) but more than that. Once you’d got over the thrill of seeing a band you’d followed for years getting its big break – a kind of “go on, boys!” vicarious rush – you realised they belonged right there. And honestly, their “House Of Noise” deserves to get very big indeed.

One of the very, very best records from a British band in a very, very long time.