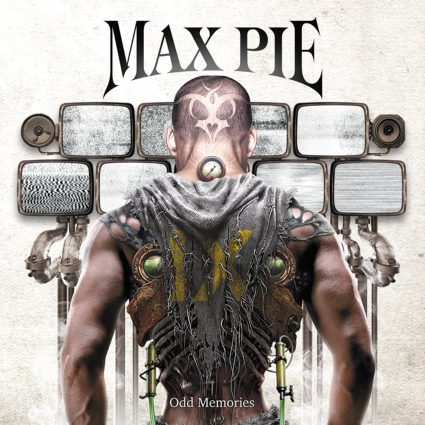 For a band that took just the seven years after forming to release their debut album, Max Pie need to be congratulated on being so prolific once they found their feet. This is their third record since 2012, and is immediately their most polished and their best to date.

For those that aren’t familiar with the band, it might perhaps come as something of a shock that they are from Belgium as much of this type of stuff might come from other parts of the world. Max Pie deal in a grandiose form of music. Somewhere between Symphony X, Dream Theater, Magnum and Scandinavian Power Metal covers it.

A lengthy record, it is packed full of bombast, sincerity and a soaring choruses. “Promised Land” is worthy of Sabaton or Freedom Call as it spreads its wings and looks down on us all like some majestic Bird of Prey.

Things begin in suitably cinematic fashion, “Odd Memories,” it’s title track, is less a song than a film score, and “Age Of Slavery” won’t be shackled by any type of boundaries. “Odd Future” with its swathes of keyboard and huge drums is brilliantly pompous stuff, but it’s outdone by the incredible “Love Hurts.” If it’s title sounds twee, then the track is anything but, as it lurches from one emotion to another in its near ten minutes – if Dream Theater had written this it would be being hailed as a masterpiece.

Nothing else here can live up to that, but “Don’t Call My Name” doesn’t try to, instead it’s just aggressive and manages to rage in its own way. “Hold On” attempts being a tear jerker and just about pulls it off, and “Cyber Junkie” is a kind of interesting forward thinking stab at some “Operation Mindcrime” era Queensryche.

The closing “Fountain Of Youth” decides to pack its things and race off at breakneck speed, before considering its options and doing the mid-paced rocker thing admirably, allowing for a period of reflection at the end of something that requires thinking about, given its scope. So what of “Odd Memories?”Is it prog metal? Is it power metal. Yes and yes. Is it good? Hell yes.