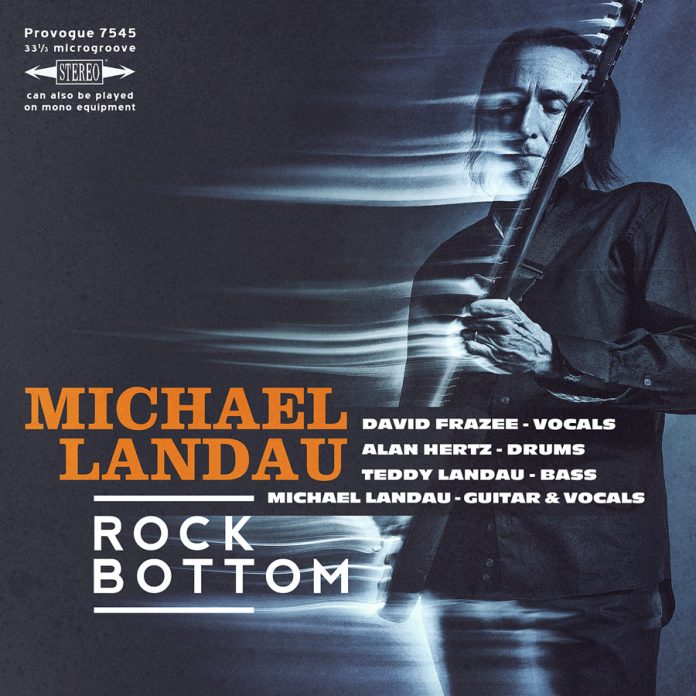 Sometimes you just have to listen to those urges.

Take Michael Landau for example. He might have played with Robben Ford before he was an adult, joined Boz Scaggs for a world tour while still a teenager, before settling down for sessions with Pink Floyd, Miles Davis, Joni Mitchell (he toured extensively with Mitchell throughout the early ’80s), BB King, James Taylor, Ray Charles, Rod Stewart, and countless others, but its not enough.

The genesis of “Rock Bottom” according to the man himself was, well, a need deep within: “I’ve been playing mostly instrumental music for the past 10 years,” he said: “[When] out of nowhere I woke up one morning with the strong urge to play some hard-edged music with vocals…”

Next step was to find a band for the endeavour. To do that he rifled through his phone book and got long-time collaborator David Frazee (Burning Water), his brother Teddy Landau on bass, while Larry Goldings on organ, and Alan Hertz playing drums, round out the band.

If that was the easy bit, then the tricky part is making the record, and although Landau calls the album “hard edged” it has a West Coast US, sun drenched air and it is as likely to be jamming as it is to be rocking, and there are occasions when you wish it would cut loose a little more (although for all that nothing here is too long).

It comes in complete with a jazzy, poetic – and yes slightly hippy – side too. Opener “Squirrels” has an understated, sprawling ethic, as if it is popping in for a slightly hazy visit than doing anything substantial, with mere hints of M Landau’s chops.

This is a record about light and shade, though. And “Bad Friend” has the chunky fuzzy air of Hendrix, and even if “Getting Old” is wonderfully whimsical – and with Frazee dealing in poetry rather than the conventional “maybe, baby” type lyrics it is tempting just to disappear in some reverie, no one can deny the skill here. The lead work is reminiscent of Robin Trower as it winds its way down whatever path it chooses.

Everyone here makes it look so effortless, “We All Feel The Same” is bluesy but it is blues in the way that Dan Patlansky, say, of the modern players might do it rather than anything trad. It’s plea for unity is one of the best things on offer here.

T Landau is in fine form throughout, but nowhere better than on “We’re Alright” which has a desert rock hum that wouldn’t be out of place on a Kyuss song, as if to show that this is a record without limits.

Surrounding himself with these musicians was clearly a masterstroke, given that “One Tear Away” is built around some superb organ, while that “Poor Dear” rails against technology and materialism is perhaps even more pertinent on a record that sounds as organic as this one does.

“Freedom” is more ephemeral, perhaps. Not too dissimilar from Jeff Buckley, “Heaven In The Alley” has a more pop orientated shuffle. It might be on some long lost Beatles St Pepper’s outtake album and before the record finishes – the closing “Speak Now, Make Your Peace” is not only the longest thing here, it has the same soul-filled intent of “The Revolution Will Be Televised.”

In his desire to make harder edged music, Michael Landau spoke of returning to the sounds of his youth. He’s done that, because “Rock Bottom” doesn’t sound – or even want to sound – like a record that was released in 2018. Instead it is a timeless, expertly played trip back into the sounds of yore.

Landau needed to make this record and it shows throughout.