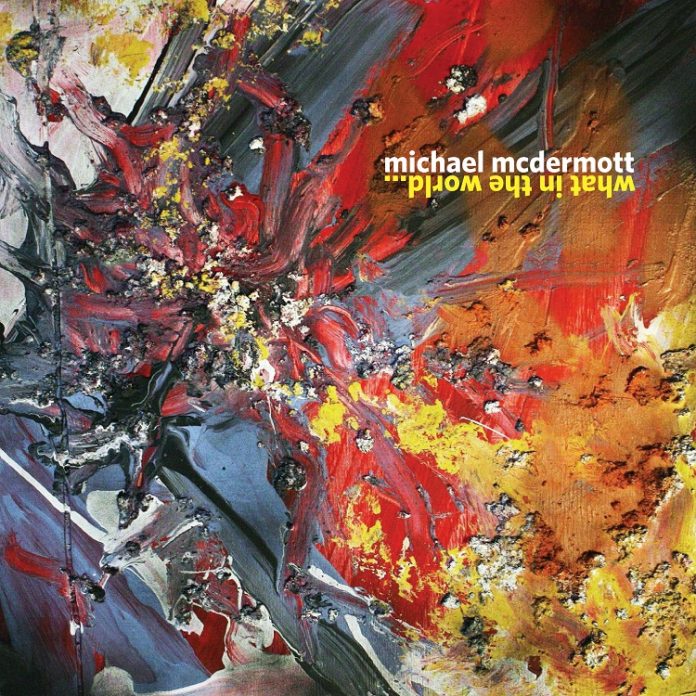 I write this on the day that Tom Petty’s family have to put a “cease and desist” order on the President of the United States to make him stop using “Won’t Back Down”. The same day that he claimed he’d sold a million tickets for a rally in Tulsa and about as many turned up as if I was at the hustings.

These are – as every email you get tells you – “unprecedented times”. The football team I support played its first game for three months yesterday. No fan was there to watch. I haven’t seen my family in as long – having to watch my baby niece grow up via Whatsapp calls. Then the world is getting more racist by the day, there’s a worldwide recession, and lord knows when I’ll next see a band play live.

If this is the “new normal” you can keep it. I didn’t like the “old normal” much, but it was better than this.

We’d been in lockdown for a couple of weeks when I heard the first song on “What In The World…”. The near title track “What In The World” was, I said then on Twitter, and I will say it here, the best song released anywhere this year. By anybody. A perfect amalgamation of Tom Petty’s sound and the quick-fire delivery of “We Didn’t Start The Fire”, it is more than the state of the union. It is the state of us all. The confusion, the worry, the unknown. It is wonderful. Plus, the line “its not hard to see, the President’s a criminal,” puts him on the right side of history when all this is tallied up.

Yet, honestly, did we expect any less from Michael McDermott?

His third album since 2018, “….World” cements his position, as – so far as I can see – the finest wordsmith there is in rock n roll. This is Dylan-esque, he’s that good.

Away from the blistering rock n roll of the opener, whatever he turns his hand to here sounds like gold is being spun. The stories he weaves here on the likes of “New York, Texas” are – and I know I have used this line before where he is concerned – worthy of an HBO Mini-series, but somehow, even more than normally, the music matches it stride for stride. The gorgeous harmonies of Heather Lynne Horton, here, and the guitars of Will Kimbrough throughout, are incredible.

I mention that early, because honestly, as usual I get side-tracked by the use of language. “Blue Eyed Barmaid” where in the space of five minutes you feel you know her too, speaks to everyone who has ever had a brief encounter that might have been something more.

There is a staggering variety here, more than anything else. “The Things You Want” sounds like a The Wallflowers song, but by the next one there is something epic sounding, windswept yet grounded. “Veils Of Veronica” must surely be autobiographical. “The other day I found the present, that I didn’t get to give to her on Christmas Eve….” he intones near the end, and it is so poignantly done, especially with so much death in the world right now.

“Die With Me” wrestles with demons. “He told me to touch him, so I did, how was I to know, I was just a kid” and somehow the music mirrors the unsettling feel. A further example of how he does things in a different way to everyone else is on “Contender”. The story of McDermott is well known and I don’t intend to recount it again here, but rather than be bitter, this one is given the spirit of “The River” era Springsteen. The sax, its all in the sax.

But if there’s a light at the end of the tunnel then its hard to find in “Mother Emmanuel” on which the senseless murder of nine people at a Bible Studies group is documented. A true story, it is one of the best things here, its screeching blues are at odds with how most would do it -but most aren’t here.

“No Matter What” is a more stripped down acoustic thing. Classic singer/songwriter, if you like, with harmonica to boot, and a kind of Celtic feel, with the pay off line: “I was still drinking then…..” As he’s documented on his last two – fabulous – records, he is in recovery, and in that context, the beautifully tender “Until I Found You” is important.

The last one “Positively Central Park”, takes on a kind of hymn-like quality: “I am not sure there’s a heaven, boys” he sings, and there is a clear feel of second chances, making the most of what you have. It seems to have infused all of McDermott’s recent work and it certainly does here.

There was an interview with McDermott, where he spoke about “What In The World….” And he said this: ““I’m from Chicago, like eight miles from where John Prine grew up, so this is how we do Americana in Chicago, motherfuckers” and that seems kind of apt, except to say. No Michael, this is how you do Americana, no one else. And that’s why you are the best at it.

The last two have approached perfection, this has managed it.