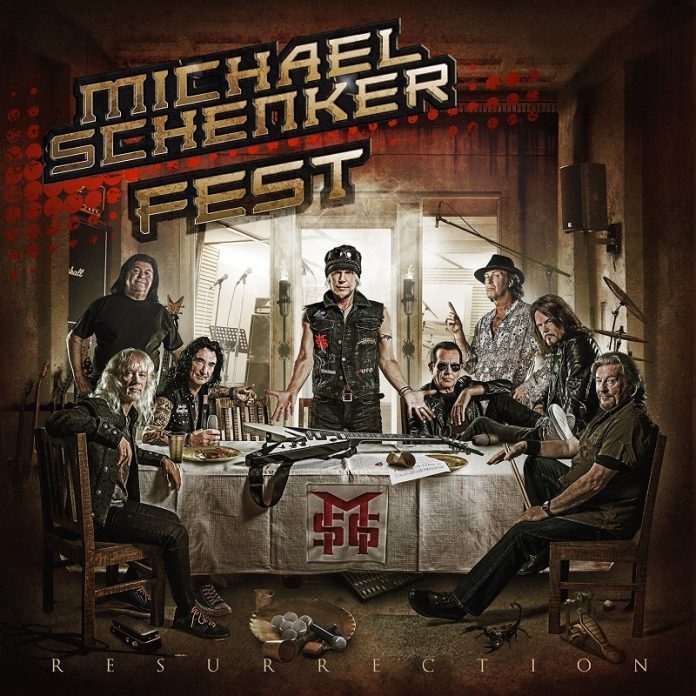 The gang is (nearly) all here

There are some albums that feel like landmarks. The ones that seem that they are a little but above the norm. This is one of them.

Michael Schenker’s recent work has been superb. The Temple Of Rock stuff has appeared to reinvigorate the main man, who in 2008 finally got over his crippling stage fright and began to enjoy playing live again.

Even allowing for that, though, there was still a sense of wonder about Michael Schenker Fest, a mammoth undertaking which saw In 2016, a tour featuring Gary Barden and Graham Bonnet of MSG, plus Robin McAuley of the McAuley Schenker Group. – and just for good measure, instrumental back-up was provided by former M.S.G. bass player Chris Glen and drummer Ted McKenna, plus guitarist/keyboard player Steve Mann. The results (recorded for a DVD reviewed on these pages) were stunning. An epithet that could perhaps have been given to the idea that the line up should record an album of all-new material. Only this time they added the considerable pipes of Doogie White (who has been on the ToR albums), oh, and they brought Kirk Hammett along for the ride.

Granted, the Metallica man is only on one song – but what a song it is! The lead off cut here, the power metal tinged “Heart And Soul” which finds McAuley’s wail in full effect, before the solo kicks in. No wonder, the gleeful exaltation of “this one’s for you” is at its heart.

Much of the attention – rightly – will focus on the two songs here that feature all four singers. “Warrior” the first, is a thing of great beauty. Veering from an almost folk opening to something that Avantasia (with whom MSF have sonics in common as well as having loads of vocalists) might do at their best.

But although this record is mostly necessarily overblown, it is not averse to a proper metal chug. “Take Me To The Church” is just that and there won’t be a fist not in the air when it is played live, and “Night Moods” which finds Graham Bonnet doing what only he can do, has the air of Judas Priest covering Deep Purple and, even though Bonnet isn’t the singer on “Girl With Stars In Her Eyes”, it doesn’t half sound like Rainbow.

Bonnet is back on “Everest” which not only soars high, but also is an impressive example of Schenker’s skills, while Gary Barden is on the fun and frolics of “Messin’ Around.” A little like UFO – let’s not deny it – it would sound like filler in other hands. Here, it just sounds like everyone had fun.

“Time Knows When It’s Time” is the sound of metal. Pure and simple, and “Anchor’s Away” combines the impressive ambition of sounding like it is from a film score, with the gloriousness of a life on the ocean waves. “Living A Life Worth Living” – another of the Barden contributions – is equally as OTT in its own way, boasting a huge chorus that belongs in Eurovision.

“Resurrection” concludes with another ensemble piece. “The Last Supper” – the inspiration for the front cover of the record  – and you imagine it will form a wonderful centrepiece when this band gets to play it together.

Indeed, it is perhaps testament to the star quality of the man himself that he isn’t the centre of attraction and that MSF is very much a band. Only once, on “Salvation” does he afford himself the luxury of an instrumental, which takes in everything from bluesy shuffle, to orchestration. It is a timely reminder that Schenker is still one of the greatest. But most importantly, one with a grand vision to match his incredible talent.