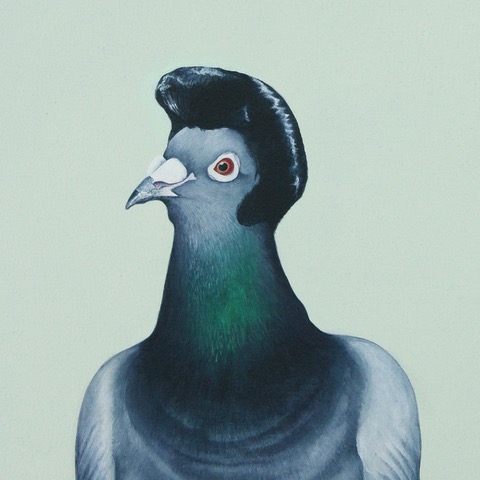 Fronted by Micko Westmoreland, musician and actor already well known for solo releases under his own name and material as The Bowling Green has a debut album of slick new wave and razor-edged rock’n’roll released this month with the Mellotronics. The Mellotronics being guitarist Jon Klein, drummer Nick Mackay and new bass player Vicky Carroll, although on the recording the bass is played by none other than Sir Horace Panter of the Specials. Terry Edwards added sax and trumpet and Dylan Bates the violin.

The album kicks off with `Noisy Neighbours` a song about a housing co-op with a number of serial complainers where the singer lived, with one particular woman nicknamed ‘The Dragon’, whose histrionics were noteworthy. A wonderful art rocky piece that had me in mind of Ray Davies singing Wire`s `Eardrum Buzz.` I thought I was listening to a number from Adam West sixties era Batman series with `Psychedelic Shirt` a tale relating to Micko`s experiences of an out of hours school disco in a scout hut in Leeds where his newly procured paisley shirt was sought and ruined after he`d taken it off because he was too hot, It was found ‘mopped up in the fluid, screwed up in a ball’ in the boy`s toilets. The number had a joyful retro beat feel about it with some gothic tinges.

`The Finger` is inspired by a man the singer saw regularly on the way back to his North London home, invariably sat in a local pub reading the Daily Mail. “The seething disdain and unwillingness to accept changes in culture, was indelibly etched on his face” he recalls. A charming quite Brit popish offering with the lyrics almost narrated over a musical backdrop of `Lust for Life` meets `Parklife`. Cracking stuff. A song that reflects on the passing of time is shared with `You Killed My Father` featuring inimitable piano touches and a fine string arrangement from the late, Neil Innes, in what would prove to be one of the Rutles, Bonzo Dog legend’s final sessions. A wonderfully melodic and reflective composition with lyrics that were a little curious to say the least.

`Imelda` is a punk-rock flavoured lament to Filipino dictator Imelda Marcos where her footwear obsession is namechecked. There`s a subtle quivering guitar riff at times throughout `Sick & Tired` but there seems to be a mishmash of styles during this song about almost the tedium of life. There was a delightful saxophone solo midway through.

`The Fear` has some superb brass leading this track along. It deals with phobia and philosophical ideas of free will, a philosophical fantasy about the works of eminent psychologist Georg Eifert. A track that will really get into your sub conscious, brilliantly compelling. A tale of maybe disappointment in an acquaintance came with `Good Friend` a really fast paced rock out of remonstration.

`The Now` was another quite eclectic piece, another song that was what I would call art rock. There was some pleasant brass solos and intricate guitar riffs offered up. The album closes with `Halcyon Days` with lyrics pertaining to life imitating art in New York City. A quite dreamy indie poppy musical slice.

“½ dove – ½ pigeon” is a really interesting release. Lyrically it covers subjects from the mundane such as annoying neighbours, school discos, life observations, boredom, and reflection on happier more serene times to the slightly surreal and intellectual like dictators and psychologists. The musical accompaniment is wide-ranging and diverse, encompassing new wave, Britpop, and rock n roll but it`s nevertheless enthralling and captivating.

The album may be “½ dove – ½ pigeon” but for me there`s no half measures here.