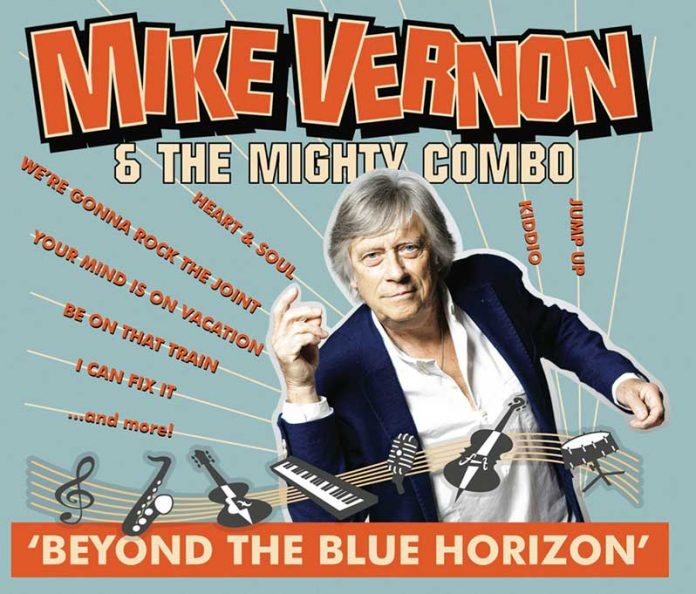 Mike Vernon is better known as a legendary producer of albums for some of the most famous artists in British Rock and Blues including John Mayall’s Bluesbreakers, David Bowie, Ten Years After, Savoy Brown, Fleetwood Mac, Chicken Shack, Focus, Freddie King, Climax Blues Band, Level 42 and Roachford. He was also the founder of the Blues record label Blue Horizon (Peter Green, Rory Gallagher, Paul Kossoff, Christine McVie), a major ‘ground breaker’ in its time and still revered to this very day. Maybe not quite so well-known is Mike’s ‘other’ job, that of vocalist. In the 1970s and early 1980s Mike was not only a member of The Olympic Runners but also the baritone singer with Rocky Sharpe & The Replays. So, it`s not a complete surprise that he has gathered some excellent musicians in the form of Kid Carlos (guitar), Ian Jennings (upright bass), Matt Little (keyboards), Paul Tasker (saxophone) and Mike Hellier (drums) called them the Mighty Combo and has recorded and released an album.

The release contains twelve titles in all including nine new self-penned originals and three covers. `We’re Gonna Rock The Joint` is an uplifting track to kick us off and allows the band to showcase their abilities. A cover of the Brook Benton hit `Kiddio` has a real bluesy feel and had that “Looking for trouble” vibe about it. `Heart & Soul` and `I Can Fix It` are up tempo rhythm and blues numbers, the later blasting through at a fast pace, having a Big Band feel about it. Another cover is the instantly recognisable ` (I Don’t Know Why I Love You) But I Do` made famous by Clarence `Frogman` Henry and brought back to life in the film Forrest Gump. It`s a faithful and enjoyable version. I really loved `Be On That Train` with its catchy horn sections and chorus that almost compelled you to sing along. Mose Allison`s `Your Mind Is On Vacation` gives us a breather and it`s an amiable number with a real jazz touch and a thoughtful interpretation lyrically and musically. `Old Man Dreams` is probably the most laid-back track on this offering. A cut that any Rhythm and Blues band would be happy to have in their set. `jump Up` is a nice enough tune but the lyrics seemed a little misogynistic unless I misheard them. `Red Letter Day` is another enjoyable bluesy piece and sets us up nicely for the penultimate song `A Love Affair With The Blues` which could just as well be a narrative of Vernon`s life, the title says it all. The album is closed out with `Hate To Leave (Hate To Say Goodbye) ` and it`s a cracking swing number to end on.

What can you say about this release. If you like Rhythm & Blues in the vein of Fats Domino and jump jive, look no further that this offering, it has all you`ll want and more. I enjoyed these energising and tuneful rocking slabs of blues, jazz and jive and can imagine audiences’ dancing in the aisles when these tunes are aired in a live setting. Look out for Mike Vernon & The Mighty Combo when they come to your town.