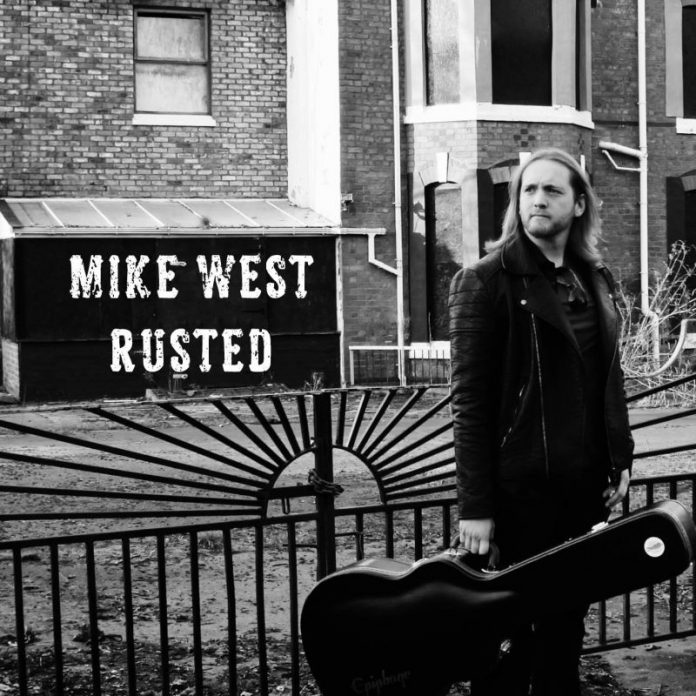 There’s a lot to like about Mike West even before you’ve pressed play on “Rusted”, his debut EP.

The bio he sent in featured quotes from his own imaginary reviews of his work, including this, which was MV’s personal favourite: “Definitely not a waste of 18 minutes. This isn’t a dog-shit of an E.P”

Listening to “Rusted” you can see exactly why he was the support to the wonderful Shawn James on his recent UK tour. Acoustic for the duration in the same way that James’ brilliant “On The Shoulders Of Giants” record was last year, and possessing a similar kind of gravelly voice, West gets going with “Work On”.

As a snapshot as to what he does here, you won’t find a better one. Timeless delta blues, but with a hint of the chain gang about it, “…On” features at its heart the key line “think of the money you can’t take with you when you die.”

And if that hints at a darkness in the songs, then the more folky “Stranger” – which wouldn’t be out of place on a Seth Lakeman album – offers a lighter, more lovelorn side.

Perhaps best of all, though, is “What If?” with its echoes of Damien Rice, which asks the questions, but can’t find answers it is looking for.

As you’d expect from five tracks that clock in at less than 20 minutes, there is nothing on “Rusted” that outstays its welcome. “Keep Going” – it’s longest song – manages to include the line “I know it’s not my time to die, but I feel near it” and still manage to be a beacon of hope.

The closing “Rock Ferry” – opening line “I’m not ashamed of where I am from, but I ain’t exactly proud” –  is another superbly crafted affair, taking the theme of frustration with your life that has been done a million times, but still finding something fresh. That in a nutshell is “Rusted.” There are million and one troubadours who heard Springsteen do “Nebraska” and think this stuff is easy. There aren’t many as interesting as this.

Mike West is looking for quotes. How about this one: “Rusted” is the type of record that makes true sense when it’s you and the darkness of the small hours with everything you regret for company.