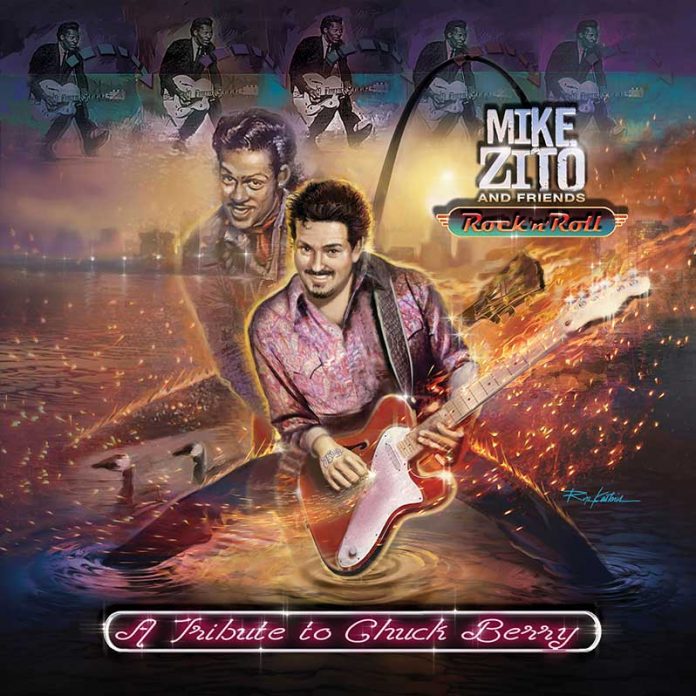 I am not a religious man. So, somebody has to help me here, please?

I need to make a confession. Well, two, actually.

So, because I am not a catholic and can’t go into the booth, I am just going to come out and say it.

Right, what’s the punishment for that? Shall we say three “Hail, Lemmy’s” and start again?

The second confession is particularly important here, given that “Rock N Roll: A Tribute To Chuck Berry” is exactly what it says. That all being said, the fact that it is done by Mike Zito and Friends, is rather important too. Because “& Friends” here, actually equates to a cast that is quite astonishing.

It starts with “St Louis Blues” which has Chuck Berry III on. Chuck’s grandson does it well too, on a horn drenched thing that reminds me of if Southside Johnny was doing this to be honest, and it is one of the best here.

Walter Trout comes in and sprinkles his particular stardust over “Johnny B. Goode”, Zito’s Mississippi All Stars bandmate, Anders Osborne, is suitably southern rock on “Memphis”, Robben Ford gets kinda funky on “You Never Can Tell” and the force of nature that is Eric Gales has the personality to carry “Back In The USA” and make it his own. That’s before Tinsley Ellis does “Promised Land”, a fine duet with Zito (and my fave Chuck Berry song since I heard Elvis’ version as a boy…..which kinda sums up my relationship with Berry, I guess, it’s all through the prism of hearing other people do these songs.

One thing all of them have in common is they sound pretty much like you’d expect. That isn’t the case on all of them. Alex Skolnick does a brilliant job on “Downbound Train” and maybe most of Zito’s audience might not know his day job, suffice to say Testament do not sound like this…..

And there’s another too. Arguably the biggest star here. Joe Bonamassa, does his thing on “Wee Wee Hours”. “His thing” being the operative words too, because the solo he plays is just Joe, no one else. I guess it depends on your views on this. I come from the school of thought which says that if you are gonna do a cover make it your own. Others disagree.

And they’ll probably disagree with me here too, but there’s a smattering of songs on this that I didn’t know before and don’t especially like now I do. Country star Ryan Perry shows on “Let Me Be Your Driver”, but the lyrics, I dunno, they don’t age well in this modern world, lets just say that.

Similarly, whilst you can never argue with the quality of Sonny Landreth’s slide guitar playing, whether “Havana Moon” is the best one they could have done with it, I am not sure.

And even the always welcome presence of Kid Andersen can’t disguise that the last one, “My Ding A Ling”, is just polishing up what isn’t a very good song at all. The “nudge, nudge wink wink” sniggering is all a bit juvenile for my tastes.

The country stomp of “Thirty Days” featuring Albert Castiglia, which comes just before is much better and shows, perhaps that when this record is good, it is very good indeed.

But it shows – for my money anyway – the problem with Chuck Berry. Some of it is great, some of it less so and some of it was of its time and not this time.

Even if “Roll Over Beethoven” is inexplicably missing, is there enough here to get me on a Road to Damascus style Chuck Berry conversion? In all honesty, probably not. Still, it seems like everyone had fun here, and that, I suppose, was the point.