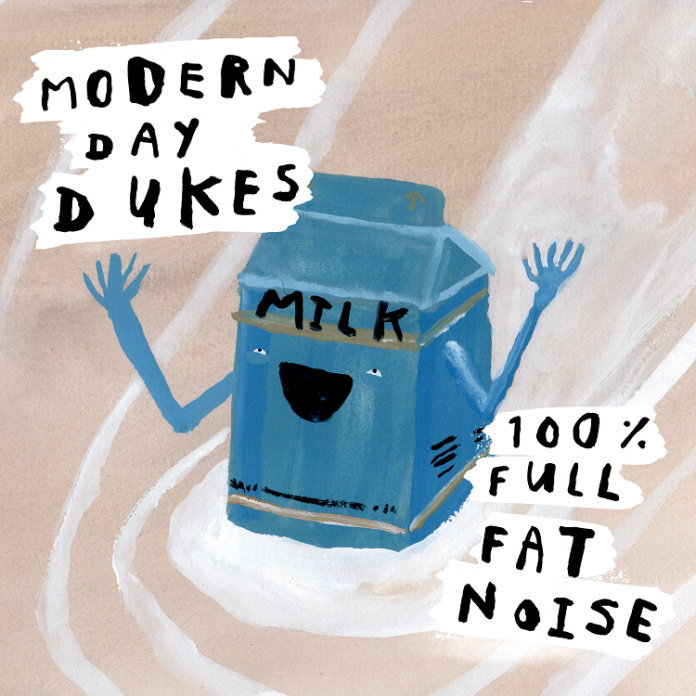 Who and what the hell are the Modern Day Dukes? Well, the answer is a dirty, sort of weird punk / rock quartet from Sheffield / Huddersfield / Harrogate comprising Rory Hebblethwaite (bass and vocals), Liam`Pais`Hill (bass and vocals), Hannah Smith (vocals and Keys) and Jordan Swales (vocals drums). The band release their first album entitled “100% Full Fat Noise”. This debut is comprised of ten rock tracks recorded with two basses, keys and drums. The blurb states that the album takes pop harmonies and gnarly punky tones, mixing them with proggy riffs and structures. The lyrics deal with subjects such as Russian history, the zen of trying to live healthily and Jeff Goldblum.

The album kicks off with `Company Anthem` and as it says in the title, it`s a very anthemic, galvanising piece and at under two minutes in length, a nice introduction. `Liability Friend` follows and it`s straight into the song. There are driving bass lines, heavy drumbeats with lyrics conveyed on top with a chorus of “I hope, You hope, It`s Getting better” A type of uplifting positive chant to a captivating tune.

I thought `Go! ` with its grinding bass and bellowed words was one of the catchiest offerings on the album. Wonderful. `Film Noir` is again a thumping, almost relentless musical blast with the vocals distant and seemingly intoned through a megaphone part way through. `Tourist` starts quite hypnotically before it gets really grungy with some almost Sabbathesque riffs, then three quarters of the way through it reverts back to its entrancing beat and ends with very shouty rhetoric. There is a delightful groove to `Spent` with the lyrics shouted abstractly and along the way it seems to plough another furrow. Superb.

When I saw the title of the next song `Okhrana`, I thought what, is this a made-up word but after probing the web, I was to be enlightened. The Okhrana were the secret police of the Russian tsars, created following the assassination of Tsar Alexander II in 1881. For over thirty years, they infiltrated, monitored, censored, and detained groups seen as destabilizing the nation or threatening the autocratic power of the Russian Empire. The tune is quite unnerving, which probably strikes the right note for this unpleasant outfit that the song alludes to.

`Low Calorie Groove` is the longest track on the album at over five minutes in length. Groove is the sense of propulsive rhythmic “feel” or sense of “swing” created by the interaction of the music played by a band’s rhythm section (drums, electric bass or double bass, guitar, and keyboards) This probably sums up this track better than I could. It was quite an interesting sonic ride with some well-crafted expressive idioms. The album is closed out with `Blum` which had a touch of Marilyn Manson`s `The Beautiful People` in it`s initial riff but was quite a dynamic offering.

There is much to enjoy with Modern Day Dukes inaugural release and running at over the half hour mark there are no fillers here, just real substance. The band having two bass players gave the sound a real depth and a rich heaviness, There are big riffs and some memorable singalong choruses. Imagine the love child of The Pixies and Zodiac Mindwarp and you won`t be far away. A cracking debut from this troupe.