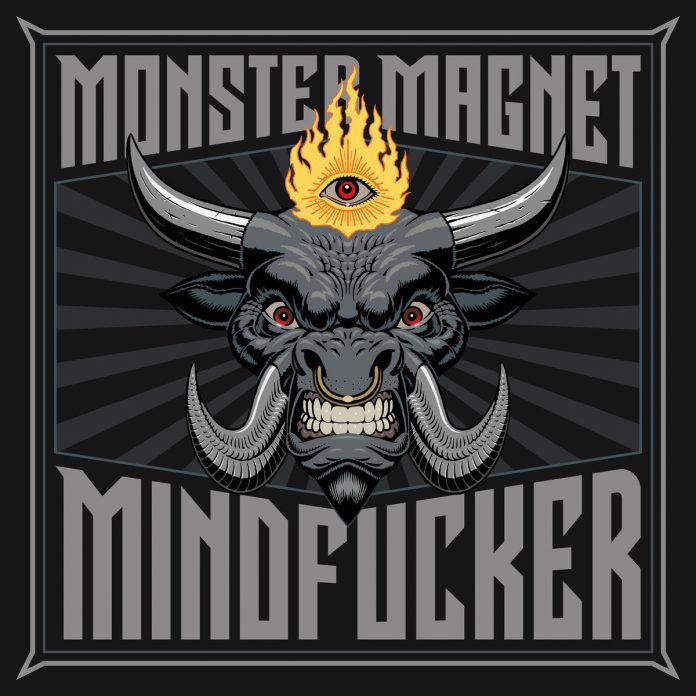 “I’m never gonna work another day in my life” – when they get it right, Monster Magnet always had the capacity to embody the spirit of rock n roll. That line – which has been ringing around in my head since 1998 when I had a job I hated and still as important today when I have another job I hate – was from the title track of their album “Powertrip”, and is right up there with that bit in “It’s So Easy” when Axl yells “why don’t you just fuck off” or that bit in Ace Of Spades where Lemmy manages to turn the phrase “don’t forget the joker” into the most threatening sentence ever uttered.

It also represents something more, because if that record is one that would be in my Desert Island Discs collection, then it is the last truly classic record that Dave Wyndorf and his assorted merry men since have made. There have been some moments since of stunning quality, of course, but nothing consistently brilliant.

Until now, that is.

Right from the get go, it is absolutely certain that Monster Magnet are bang on it. Whatever it is. “Rocket Freak” kicks off with the line “oh my God, I am totally shot” while at the same time sounding as full of beans as a two-year old puppy alone in the house, is like some fuzzy version of the Backyard Babies, or more accurately, I suppose, Atomic Bitchwax – who most of the band are in when time allows. This is the soundtrack of a drunken night at the local biker pub when they really want to turn it up loud and annoy the neighbours.

Even more brilliant is that this is the default vibe of the rest of it too, “Soul” has the classic Monster Magnet sound, if you will, the one that is at once familiar yet sounds like no one and anyway has so much guitar you’re too busy headbanging to analyse.

The title track could have actually come off that album twenty years ago, there is an insistence about its grooves and the chorus is one that welds itself into your brain in about three seconds, and by the second time you hear it you’re screaming “you’re a mindfucker baby” with one fist in the air and your phone in your other hand ready to text your ex (ok, maybe that’s just me…).

The rest is a mixture of outright incredible and weirdly brilliant. “I’m God” is from the latter section, with Wyndorf appearing to foretell the apocalypse in a way that only he could, over a brooding soundscape. “Drowning” just might be the best thing here. A seven minute almost bluesy ballad, that builds to an incredible conclusion, and if the line “I could get laid in a thousand ways and I’d still be thinking of you” doesn’t give you nightmarish mental pictures, then you might want to consider this: if MM have a “House Of The Rising Sun” moment then its right here.

Perhaps because of the labyrinthian things that have gone before, “Ejection” does it’s work with a short, sharp boot to the balls, and is as rock n roll as Keith Richards riding a Harley Davidson into hell, in truth – an idea that “Want Some” continues, given that it doesn’t sound like it was made in a studio so much as in a Meth Lab.

“Brainwashed” is proof that any song that starts with a solo rules, but then, it comes on somewhere between Alice Cooper’s early stuff and Iggy Pop to provide a change of pace, and there’s a real sixties vibe to “All Day Midnight” that has more than a hint of The Doors.

“Mindfucker” is an album where Monster Magnet seemingly want to break the mould, and never more so than on the last song, “When The Hammer Comes Down”. It seems almost ridiculous to say this, but I am gonna anyway: Honestly, if The Hold Steady ever jammed on Sabbath, then here’s the results.

Whatever “Mindfucker” means to different people is almost immaterial, because Monster Magnet haven’t sounded this glad to be making music in decades. Album of the year material, right here. So good, it’ll blow your mind.