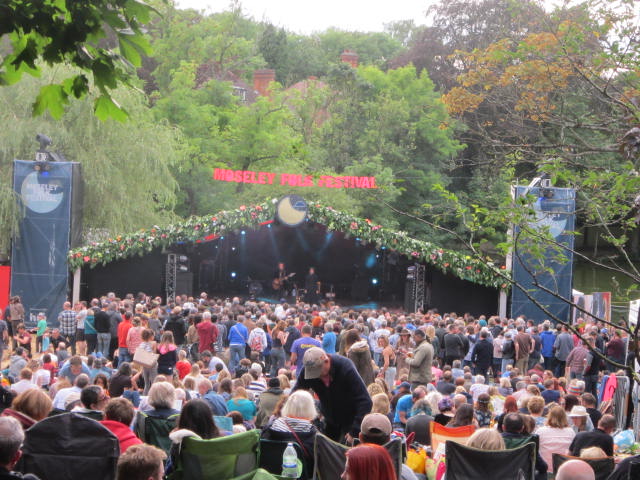 MVM was at Moseley Folk fest this weekend.  Friday, saw everyone there as a fan to watch Billy Bragg, now Damian shares his thoughts on Saturday and Sunday – s well as helping a worthy cause close to his heart to boot

Now in it`s tenth year the Moseley Folk festival tries to showcase new and unsigned artists alongside more Nationally and Internationally acclaimed artists. It helps that it is held in a stunning woodland glade in the centre of the Village of Moseley in Birmingham. 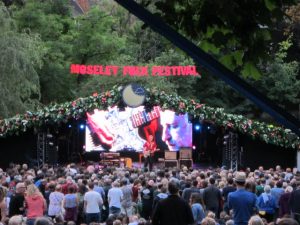 I have attended on numerous occasions but this year I was volunteering for a local charity Sifafireside, based in Digbeth that supports homeless or vulnerably-housed people, many of whom are affected by alcohol and substance misuse as well as mental health problems. People that are amongst the most marginalised in Birmingham. The charity aims to help improve their physical, mental and social wellbeing and empower them to move to a more stable and settled life. Please see link at the bottom.

The festival organisers were kind enough to donate a pitch and a couple of volunteer tickets to support the aim of fundraising and awareness of the services in our community.

Pretty awful weather led to fewer numbers than expected at our pitch so just after five I closed up and headed off to see what was on offer music wise. Phosphorescent or Matthew Houck as he was christened was on the main stage and he really, no pun intended, lit up the late afternoon. A set that was very appealing with some wonderfully keyboard driven tunes. “Song For Zula” was the outstanding track for me. The crowd seemed to really take to this unassuming artist as well. On the Lunar stage Howie Payne who fronted the Stands sets up and plays a short but well received set. It was at times distracting as Songhoy Blues were sound checking on the adjacent stage and at times took a little away from the performance. I imagine a small room or tent might have suited better. Next on the main stage are Songhoy Blues, who hail from Mali and formed in Bamako after they were forced to leave their homes during the civil conflict and the imposition of Sharia Law. Their music has been described as desert blues or desert R&B but whatever it`s called they got a fair percentage of the crowd up on their feet and dancing along. A very entertaining hour shared. 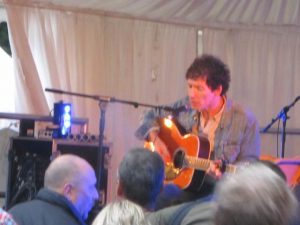 Prior to the main act of this evening we had The Treetop Flyers whom, I`m sure I saw before and wasn`t that keen on but I must admit I really enjoyed their infectious set thjs time around. Their music is very sixties West Coast and they even threw in a version of the classic Creedence Clearwater Revival number Proud Mary mid set. A pleasant surprise.

We get a mixture of old and new tunes tonight by a very competent outfit. I really enjoyed the track Jaqualine and enjoyed the show, which brightened up what was quite a dull day in terms of weather. 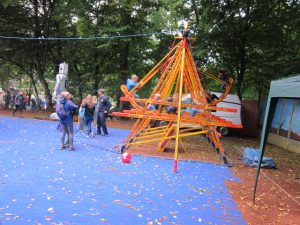 Day Three and the concluding day.

The weather. although not the sunniest, was much better and after getting the bubble machines going, the pitch got some customers.

A fairly constant stream of people came along to make small donations and engage in understanding what the charity has to offer.

It was fairly quiet when I packed in at half five and headed towards the main stage.

Not too many people would have paired Sam Beam and Jesca Hoop but it worked really well.

Sam`s main job is playing under the moniker of Iron & Wine, who would probably be catagorised as folk / indie folk and Jesca Hoop who is difficult to pidgeonhole and would be regarded as quite an experimental artist.

The duo here really compliment each other and seem very much at ease in each other`s company. The set was very laid back with Jesca admitting that she seemed to be dressed as Mary Poppins today.

The set included a couple of cover numbers that worked really well, the Dolly Parton / Kenny Rogers Islands in the Stream, written by the Bee Gees and the Eurythmic`s Love is a Stranger.

I would put this down as another of my festival highlights.

Galleon Blast were up next on the Lunar Stage and are broadcaster Mark Radcliffe`s side project, a pirate inspired type purveyor of shanty songs and covers of the Dubliners, Waterboys, The Pogues and Ewan MacColl.

The troupe are a fun time band and get the crowd jigging along.

I must admit that I really like the Jayhawks and have done some for a long, long time.

The band have been going for over thirty years and this would only be the second time I got to see them.

Probably the band`s most recognisable song is Waiting for the Sun, which was released in 1993 so it was a brave move to open with this track.

The set progressed with steel guitar fronted tunes and musical interludes supported with wonderful harmonica playing. The set of around fifty minutes was pretty well received by an attentive crowd.

The Ranters comprise of Ryan Webb on vocals, guitar, banjo and harmonica, Loz Kingsley on mandolin and backing vocals, drummer Pete Hammond(formerly of the influential post-punk band Au Pairs), bass player Richard March, who was a founding member of 90s legends Pop Will Eat Itself and one half of chart toppers Bentley Rhythm Ace) and local guitar virtuoso, Andrew Pell on lead/rhythm guitars and backing vocals. The fellas play a mix of original songs in a style that can be described as Cowpunk / Gospel / Blues.As the set progressed they were joined on stage by the Skylarks, I think the name was for a more gospel inspired number and again at the end for the conclusion of the show.

So on to the final act and what a cracking way to end the weekend with Leith born brothers Craig and Charlie Reid otherwise known as The Proclaimers. 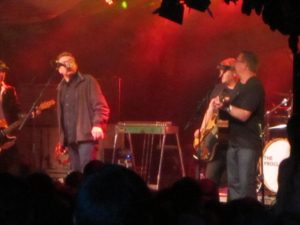 An ecstatic gathering greeted the boys as the set progressed through some indie tunes and fifties rock and roll style numbers interspersed with the better known numbers such as Letter from America,  I’m On My Way and Sunshine on Leith. The encore predictably was what most people came to hear “I’m Gonna Be (500 Miles)” and the multitude trailed off suitably sated.

So one more Moseley Folk festival done and dusted. Highlights for me were Billy Bragg, Phosphorescent and the duo of Sam Beam and Jesca Hoop but there is always something for everybody at this most diverse of musical offerings.

SIFA Fireside
www.sifafireside.co.uk
SIFA Fireside Training is accessible to anyone wanting to raise awareness around mental health, engagement, substance misuse and more. Any profits are invested back …