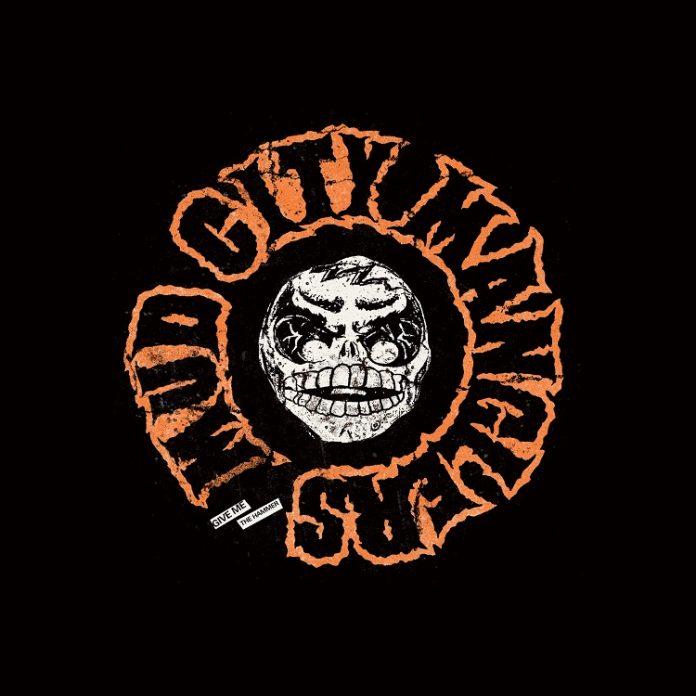 Once Upon A Time there was a band called Mud City Manglers. They came out of Pittsburgh on a mission. Precisely what that mission was unclear but it was loud, and probably involved sex, drugs and rock n roll. Not always in that order you suspect.

But they were really cool.

Those that were spending their time on the internet trawling round for the most filthy punk rock they could find at 2am in the morning (ok, not always, but mostly……) found loads of stuff 20 years back, at the start, really, of the internet boom, and MCM were an almost mythical thing. Like, did they really exist? Were they as they dangerous they sounded (I always wanted to see a fight between them and The Crank County Dareevils, but that was just me, I suppose), would they live fast and die young?

In the event they released a few 7inch singles, and a debut album on the same label as The Hellacopters and Glucifer and then, well….

God alone knows what they’ve been up to for two decades (and I’m not judging….) but whatever it was, they made it through, and now they are back with “Give Me The Hammer”, which – extremely pleasingly – sounds absolutely the same as it ever did.

The title track starts with the sound of a chainsaw (I don’t know why and I am not asking) before roaring into action, this is the sound of a Hells Angels jamboree. Rancid Leather and doing speed off a knife.

Ted (guitar and vocals) and his mate Matt on slashing guitar basically live in a world where Motorhead really wanted to play Chuck Berry tunes and that’s “The Way It’s Gotta Be”.

It has two speeds: fast and faster. Hangover Hurricane is one of the former (after all, with a morning head you can’t go proper quick can you?) but things don’t get much better on this than “One Of These Days”. “One of these days, I am gonna scratch my head with a pistol” screams Ted, matter of factly, and put simply, if some rock n roll is wholesome fun. This is the opposite.

But its brilliant, that’s the key. “Better Off Dead” contains an element of truth. “I get fucked up every single day of the week,” is a dent summation of the thing, but it also needs saying Metal Mary (you imagine they only use first names to stop the police finding them….) knocks out a bass riff that has an element or two, shall we say of “Smells Like Teen Spirit”.

“Cheater Bar” starts with that “these are great days, bros” bit from Full Metal Jacket and gets more vitriolic from there, “Armstong Park” has a groove, (and you have to say founder member, Brian, thumps them drums).

“One More Mile” begins with the words “you don’t know who I am but I know where you live” – and never has a sentence sounded more scary, while “Hammered” is essentially blank verse, or the State of the Union from Ted at least and does contain some interesting theories, and as much as “Jump Into The Fire” tries to restrain itself, you know it wants to do it all just one more last time, albeit it has a Warrior Soul thing going on.

“Give Me The Hammer” is magnificent, I think I’ve made that clear. If you like fast, furious and filthy punk n roll then this the record for you. Indeed, there’s only one question left (beyond the obvious ‘where have they been?’) and its this: just how disgusting is their tour bus after a week on the road?