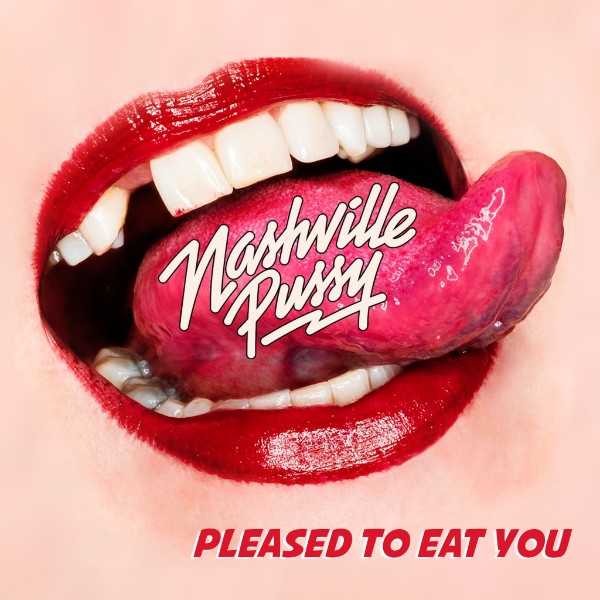 My mother, when she was alive, was probably the most naïve person on the planet. She never knowingly understood a double entendre.  Here’s an example: We were watching a panel show on tv, the whole family in the living room about 20 years ago. One of the rounds was a connections round and upon its completion, mum says, to no one in particular: “I don’t get this. What is Barclays Bank rhyming slang for….?”

Dad, mate, this one is for you to explain, yeah?

Even my mum wouldn’t fail to spot the entendre on “She Keeps Me Coming, And I Keep Coming Back” – the opening song on “Pleased To Eat You” – simply because there isn’t one to be fair. Instead, as Blaine Cartwright drawls over a rumble that is more Motorhead than Motorhead: “She makes God mad, he wants to fuck her so bad. She’s the best pussy that he’s never had.”

As opening lines go it’s a striking one, I guess. And this isn’t a record that intends to get the Nobel Prize for poetry any time soon. Indeed, Nashville Pussy have been doing this for twenty years, and they know why they do it too.  Cartwright is married to Ruyter Suys, and the guitarist (she’s ace too) puts it thus: “We are Rock ‘N’ Roll’s dirty little secret, blissfully outliving musical trends we never knew existed. More than ever, everyone needs to escape to a place where they can pretend they don’t give a shit, let their hair down and get loud, sweaty and dirty. Nashville Pussy provides that unpretentious refuge.”

So in that context, whatever I say about them, doesn’t really matter, because the Pussy don’t give a toss. That said – and if you ignore the pretty ludicrous first track – this is rock n roll distilled into its purest form, and sounding pretty damn good.

“We Want A War” takes on the world with AC/DC as the soundtrack, probably the best thing here is “Just Another White Boy” which is basically an episode of My Name Is Earl set to music – and a Supersuckers type sound it is too.

“Go Home And Die” is a filthy, bluesy attack on junkies, “Low Down Dirty Pig” – imagine Van Halen played by trailer trash – is better as Cartwright chats up a woman like this: “I am a stupid son of a goddamn bitch, that’s what my last girl said – just letting you know what you’re in for.”

In fairness to NP, not all of their songs are tongue in cheek and Suys is in top form on the superb cover of George Clinton’s “Testify” and if “One Bad Mother” is so simple it makes Rose Tattoo look like Yes, then does that make it any less fun? Nope.

The four piece can play the blues as if it belongs in the primordial sludge, and “Woke Up This Morning” is proof. Thing is, they have to do it on its own terms. “woke up this morning and my dog was dead” is not the usual Muddy Waters stuff, is it? And the slide guitar from Greg Martin of the Kentucky Headhunters, rules.

“Drinking My Life Away” finds some punkish nihilism, or at the very least it sounds like Mammoth Mammoth, “Endless Ride” is self-explanatory, leather clad and proud. Not to mention slower than many of the others.

“Hang Tight” is a bad boys anthem played in a rancid honky tonk, but maybe “Cckmp” is the fallout from that hedonism. To their eternal credit, they find another, even more earthy vibe to the Steve Earle song than the man himself – and in that moment, you realise that Nashville Pussy could have been whatever they wanted, it’s just that writing songs to be used in back alley strip clubs was what they wanted.

The closing “Tired Of Pretending” is more proof of the reality here. “I’m tired of pretending,” spits Cartwright. “That I give a shit…..” And when you trim the rest away, that is not just this album, but Nashville Pussy as a whole. And, “Pleased To Eat You” is kinda tasty.