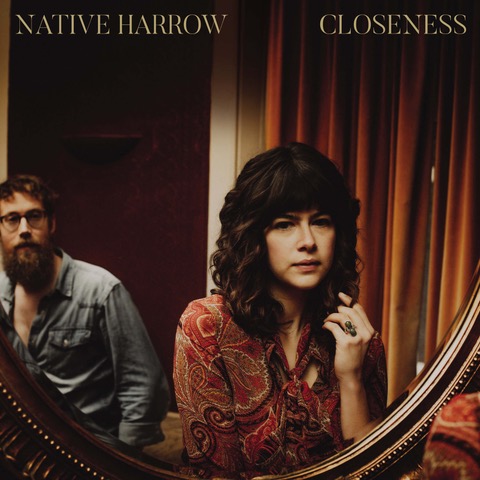 I`d heard the name Native Harrow and had assumed they may be a folk come rock outfit but no more. It came as a real surprise to learn that this Pennsylvania duo, Devin Tuel and Stephen Harms were about to release “Closeness”, their fourth LP and follow up to 2019’s acclaimed “Happier Now”.

The album opens with `Shake` with it`s slightly distorted guitar chords and wonderfully understated vocals, it`s a song that almost gave me a shiver as I listened to the slight quiver in Devin`s vocals and was left humming the chorus of “Shake when I’m feelin’ lonely, Shake when my heart’s all over the place, Shake like an elevator goin’ up, up, up, up” for the rest of the day. A song that explores the lonesomeness of anxiety and the ache of absence.

There`s a real reflective, nostalgic folky vibe about `The Dying Of Ages` whose guitar and drums set the pace for this dreamy offering which has some sweet flute inflections and infectious handclaps.

`Smoke Burns` is a delicate love song which Devin has stated “I wanted to compare love to things that are opposite – smoke being clear and a knife cutting and making you wiser. A love that is both challenging, necessary, and leaves you a better person. A sheltering place perhaps”. A fingerpicked acoustic guitar, hand percussion, kick drum and some lap steel guitar shades set a platform that allows the vocal to drift quite hypnotically atop.

There`s a strange feel to `Same Every Time`, which had a sort of tapped drum rim, bass line and underlying synth note allowing the vocals to lead us through this curious but perplexing piece.

A song that came out of years of hard touring and after some time out to reflect comes with `Carry On` a really anthemic piano and organ gospel like offering. An inspiring and uplifting rendition for these challenging and difficult times we are living through. The choir merging towards the latter part of the song was very moving.

There`s a mesmerising soulfulness to `If I Could` with its engaging handclaps and engrossing vocals which shine over the stripped back musical accompaniment.

`Turn Turn` has a laid back, late night, quite jazz like ambience about it with a brushed drum, quietly tinged organ and occasional guitar chords adding to the dominant vocals seemingly reflecting sentimentally on time maybe life passing by and embarking on a new relationship, with trepidation and hope in equal measure.

I felt that `Even Peace` had a Byrds like spirit about it. The buoyant and optimistic narrative is showcased against a quite intricate musical backdrop.

The piano led, ballad like `Feeling Blue` has a much more melancholic mournful texture to it. The more time you listen to it the more spiritually liberating it seems. There`s a similar wistful feel to the closing track `Sun Queen` another song that has a more otherworldly, divine, or ethereal significance.

Native Harrow have been described as “Laurel Canyon-style folk rock with shades of Joni Mitchell” by the Times and it`s a fair explanation of their sound which has a joyful warmth and timeless nostalgia about it. Devin Tuel has said the album was made about love and that the clock is moving, we can hold onto one another and maybe there will be tears but there will also be laughter. It`s certainly a reflection on time’s relentless churn and the fragility of life. This is a superb album and certainly one that you can lose yourself in,