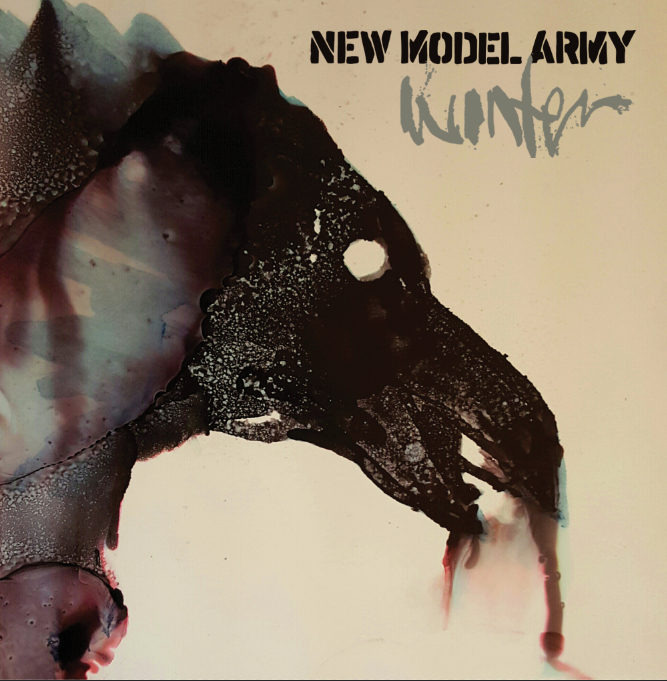 Damian runs the rule over the Yorkshire legend’s new record

Formed in Bradford in 1980, New Model Army has always been a band that are difficult to categorise, labelled punk, post-punk, Goth, Metal and Folk.

I have always liked NMA having seen them a few times and Justin in a solo setting, so I was really looking forward to listening to this offering.

The album kicks off with the track“Beginning.” A grinding bass with Mr Sullivan’s vocals almost spoken on top with a hint of underlying menace, hypnotic drums join then a floating keyboard riff, guitar before the song climaxes with the lyric “hold on” being pleaded almost cried out. A stunner of an opener.

The anthemic “Burn the Castle” follows before we get the title track “Winter” A very descriptive song that almost makes you feel that you are there awaiting the coming danger and feeling the cold. I loved the fact that you could hear Justin’s Yorkshire dialect in parts of this song.

“Part the Waters” is another anthemic song before we get the more straight rock out “Eyes Get Used to The Darkness.”

“Drifts” and “Born Feral” are more drum based offerings but both very different. The former a more gothic type sing-along and the latter having an intense threatening tribal beat.

A moving and very effective lament follows with “Die Trying” which is a social commentary on the refugee plight in Calais but possibly across all of Europe. Justin’s heartfelt vocals shared over an acoustic guitar with poignant lyrics such as “Winter storms and the snow flying, Razor wire and the gulls crying, Cross the water or die trying.” Strong thoughtful stuff.

A rockier refrain in the form of “Devil” is up next where I just let the thumping bass, rhythmic drums and grinding guitar envelop me and take me along for the ride.

I had to Google the title of the next rack “Strogoula” as I was clueless as to what it meant and found that it is the highest peak of the Tzoumerka range in Greece. The lyrics mention a mountain range but also deal with the fatality of love. Ernest words such as “You can’t choose who you love” echo throughout.

“Echo November” is a kind of protest song and hints of past glories / classics and reminded me at times of the superb “Vengence.” The penultimate track “Weak and Strong” is a pacey reflection on relationships and life. Although weak and strong seem like opposites, ironically the strong can be weak and the weak can be strong.

The album is rounded off with “After Something”, a reflective track looking on past ambitions and achievements.

This is a marvellous offering from these fellas. A cracking mix of thought provoking, intimidating, heartening post punk, rock and folk delivered to us by some gifted musicians

I must admit that I hadn’t listened to New Model Army for some time but I’m glad I’ve re-engaged with this wonderful outfit. They’ve always been a much maligned, maybe misunderstood and underrated band. But in Justin Sullivan we have a real punk poet, troubadour and in my opinion National treasure.

Long may this army march on.