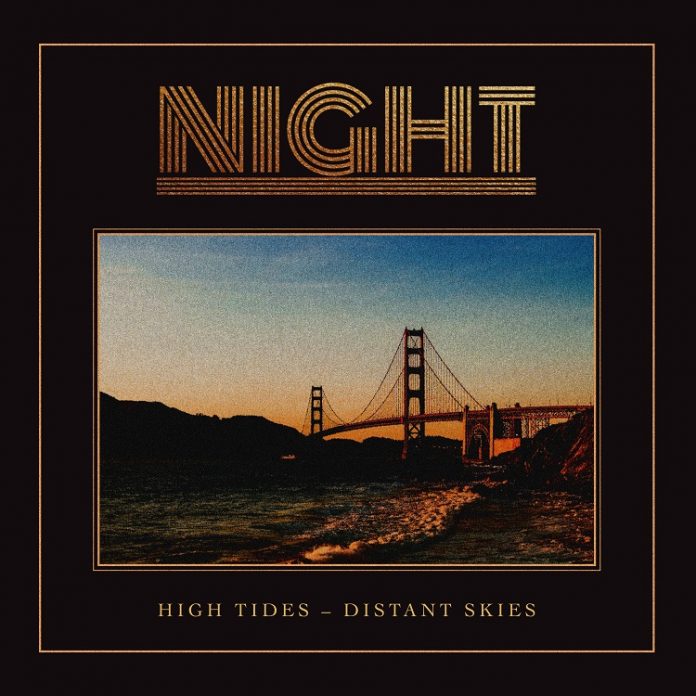 Even the cover gives it away. Then, if you were unsure, the picture of the band (look them up online) underlines it. Goodness me, there’s even nine songs on here (like there always was in the 70s). What more do you need?

If you can, try and imagine a band that supported blue Oyster Cult and Judas Priest in the 1970s, then was cryogenically frozen straight after, then found in a cave in deepest, darkest Sweden, still jamming their songs?

That band is Night.

The brilliant thing about Night is that they don’t even try and hide it. Working with Ola Ersfjord – who gets bonus points around here marked Imperial State Electric and Dead Lord to name but two, they have, in “High Tides –  Distant Skies” produced their absolute finest album to date.

Somehow, there’s just a confidence here that their other stuff didn’t have. Evidence is clear. They have released the handbrake. You can tell this from the off, as “Shadow Gold” starts the record with a drumbeat from Linus Fritzson, as if to say: “yeah we are jamming this time, you fancy it?” – he later plays a drum solo in the same song.

Thing is though, as if it was to go on 2 sides of wax, this is pretty short. “Burning Sky” fancies a go at some NWOBHM sounds (and to torture my “cave” analogy still further, it is entirely possible that the New Wave was just that when they went in).

They follow this with “Crimson Path”, which shows the versatility of the four piece (or more accurately, perhaps, the breadth of their parents’ record collections) because this one does away with the Thin Lizzy, Maiden type sounds and gets all laid back. I don’t think Mark Knopfler and Fleetwood Mac ever did a duet. They more or less do here.

Mention of Lizzy was pertinent to many of these too. The way the twin guitars of Oskar Andersson and Sammy Ouirra mesh together is positively Gorham and Robertson-esque, but on stuff like “Falling In The Black” there’s a definite disco thing too. Not in some hackneyed “I Was Made for Loving You” horrific Kiss type way, but certainly in a glitterball and miniskirt in a swanky New York nightspot one.

As such – a little like obvious contemporaries Night Flight Orchestra – its difficult to pin them down exactly. “Running Away” with its brilliant use of keyboards, is perhaps the best thing here, but the chugging “Here On My Own” will be enough to keep BoC fans happy while they wait for new material.

There is something effortlessly epic about band. A touch of prog in “Lost In A Dream”, some Yes in the guitar and the metronomic piano keeps everything on track, but there’s a suspicion too that Night are basically chameleons. “Give Me To The Night”, for example, is a “proper” metal song. Hell bent for leather, they might be, but the strings of “Under The Moonlight Sky” take things down a totally different path.

Night, looking at them, don’t remember when rock was young, but they do understand that denim and leather absolutely can bring us altogether. “High Tides – Distant Skies” you suspect is the sound of all their dreams – and probably fantasies in truth – coming true.