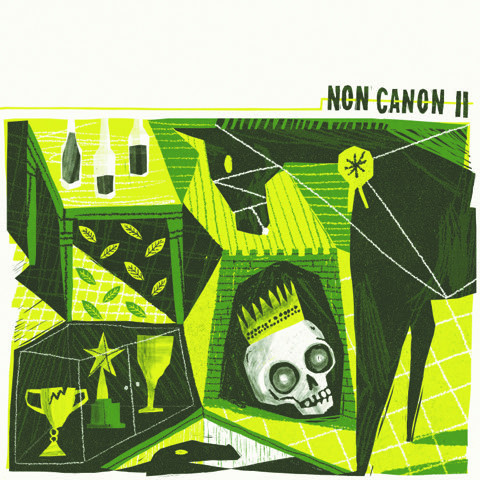 I had heard the name Oxygen Thief but if i`m honest I’d just assumed they were a prog rock outfit, not so I now realise. They are a sort of folk punk, acoustic punk outlet for the ruminations of Barry Dolan, hailing from Bristol. He has been a prominent figure on the UK scene since emerging with his Oxygen Thief project in 2006. He formed a more traditional acoustic side-project in 2016 under the name “Non Canon” and released a self-titled album. He has now followed this up with a second album, “Non Canon II” which offers songs about feelings, politics, and feelings about politics.

The album opens with `Never Say Never Again` an initially stripped back affair with an acoustic guitar and Barry`s deep rather languorous delivery. The song openly addresses his own mental health issues and the almost universal negative perception around the subject.

I felt there was almost an exasperation of this as the song progresses, first a cello consolidates this resentment then piano, drums violin and trumpet flesh out this view with lyrics that still retain a hopeful sentiment with “I`m still trying to understand.”

`The Cavalier Years` is a little brighter musically and lyrically. It jogs along as an account of a life spent not quite achieving greatness but learning to accept this. There`s a wonderful line where it`s stated “I`m much more Baldrick than Blackadder” Towards the end we have an overlaying vocal as if it`s the narrator`s subconscious thoughts trying to reaffirm the positive sentiments of this acceptance of achievement. A protest song of sorts follows with `Dark Force Rising` which Duncan has stated relates to “standing up against bigotry in all its forms and trying to be brave enough not to “agree to disagree” with viewpoints we find abhorrent for the sake of an easier life.” This pretty much sums up this earworm of a track which has some charming guitar chord picking and comes to a peak at the end with a chorus of voices reemphasising the tag line of “No you can`t complain when we talk back”, heartening stuff. There`s a sort of leisurely saxophone that introduces us to `The Sayings of the Seers` which relates an almost day in the life of…possibly somebody who suffers from Seasonal affective disorder, a type of depression that’s related to changes in seasons, mainly the winter. These struggles are laid bare, with the saxophone sporadically throughout the song and going quite free form towards the end, adding a further desolation to this honest account.

`MMXIX` is an instrumental offering, An interesting respite between the other weightier deliberations with some enchanting cello and piano shared in a quite waltz like format, although it goes a bit oddly rogue in the last minute or so. Trailing this `Sharpie` is quite raw in that it`s just vocal and acoustic guitar recalling a situation when a confidence shared was difficult to retain untold.

`Kingdom of the Crystal Skull` appears all over the place musically and could well be an analogy for the point that is being shared. The media virtually promotes false news, disinformation, almost to the point of deception and the chronicler is encouraging us to withdraw from the melee for the good of our own state of mind. A repetitive drumbeat leads us through `Self Untitled` seemingly an observatory parallel on humankind, although we may be differing nationalities, we all inhabit the same piece of terra firma.

`A Teapot and an Open Mind` relates how times have changed and should change for the better with each generation in relation to outmoded views, opinions and objectionable language expressed by our elders, who should know better. The stark delivery with just a plucked guitar accompaniment allows the opinions stated a greater emphasis.

The album closes with `And Another Thing` a very introspective piece of expression ostensibly listing the faults and foibles found after a period of self-examination. This thoughtful scrutiny is enhanced with a musical cacophony of sorts, ending with a meow from Duncan`s cat Monty.

This album is a brave, contemplative, and honest assessment of the artists reflections on their own life struggles and challenges, with some ideas as to how the world could be a better place. I`m sure the process was cathartic and does advocate some suggestions for us all to mull over. There are some heavy political and personal subjects addressed, and this could have become a bit of a preachy affair. But I found it thoughtful and had a dark sense of humour at times. A release that does need a few listens to but will maybe have you considering undertaking your own inner cleansing.