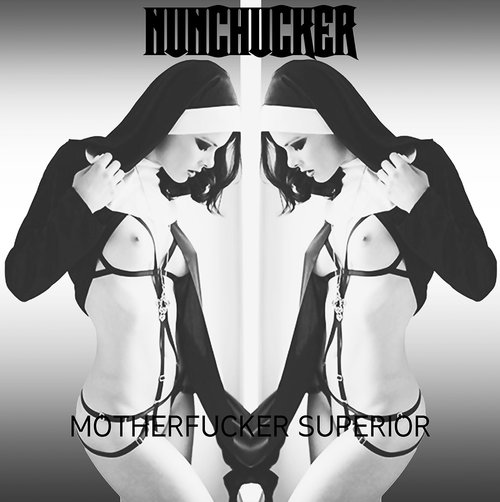 A decade in the making, London based duo want you to swallow their rock

2006 seems like a lifetime ago, doesn’t it? In England had a Labour Government, a decent welfare state and further afield Donald Trump was just a clown with a wig and lots of business interests.

To the boys in Nunchucker those halcyon days are the genesis of the band.

Chris and Matt met at what they term “a short lived and spectacularly debauched” club in Camden at that time and began writing some rock n roll songs to match.

Some of them survive to make the debut album that this project has managed, and “Motherfucker Superior” sounds like it belongs as the soundtrack to those nights.

One of the tracks that partially survived from that era – the pair re-visited them after Chris’s previous band disbanded at the arse end of 2015 – begins “….Superior” and “The Sweet Smell Of Rock N Roll” deserves to have made the cut.

Sounding like something between a Senseless Things B-side and “When Bastards Go To Hell” era Dogs D’Amour ( the bit where Tyla discovered drum machines and recorded solo) its every bit as snotty and ill-mannered as you’d hope.  Oh and by the way, just to avoid any confusion, the sweet smell of rock n roll is Belinda Carlisle’s undies on the “Heaven Is A Place On Earth” video, this is not up for debate.

Moving on, “2nd Best Girl” is as sleazy as you like, and a homage to “the kind of girl you can write songs about” and the idea that these boys like nothing more than writing big, dumb catchy choruses is borne out by “Coffin Nails”, which whether you like it or not will reduce you to singing “hitch a ride with the Devil in the middle of the night.

Resistance to the charms here is all but futile “Rockkid” (another they’ve had up their sleeves since the last decade) is perhaps the best of this dirty old bunch, while “High Priestess” owes a kind of debt to the swagger of Motorhead and “She’s On A Pole” (which survives in its entirety since 2007) is  sub Supersuckers hoedown that is as entertaining as it is unsubtle. Actually pretty much everything here can be given that epithet. “Drink B4 U Think” is self-explanatory, as the band live up to their maximum of “get to the point already”.

However, just when you think you’ve got them pegged as rock n rolling all night and part-tying every day, along come a couple to confound things. “No Master Above” allies some sleazy riffing to clever lyrics, while “Get Free” allows itself time stretch out and showcases some mighty fine songwriting.

But, you kinda get the feeling that Nunchucker are happier when they the wind is blowing through their hair and they are off looking for whatever trouble they can find. To that end, “Mirror Mirror” is a hedonistic screecher of a thing and “The Tower” fair old slams.

In addition, the CD release of the record contains a couple of tunes that weren’t on the already released vinyl, “Show Me What You Got” leaves little to the imagination and “Rock Bottom” is almost what Cheap Trick would do if they were a duo from London who had met at a long-closed drinking club.

“Motherfucker Superior” isn’t going to change the world, but then really, that was never the point. Back in about 1993, The Wildhearts wrote a song about Hampstead called “Greetings From Shitsville”, it added the postcode for good measure. “NW3” spat Ginger. It is gratifying that just up the road in NW1 some 20 odd years later, that spirit lives on.