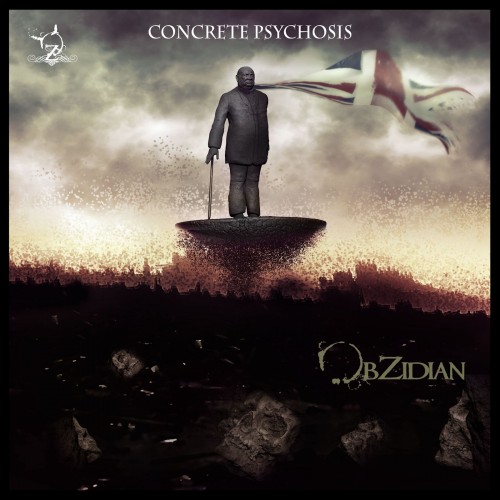 This is an album that let’s you know what you are in for literally immediately.

Not for Obzidian easing you in gently with a a spoken word bit, or as often or an opening riff, not at all. Rather “Their Legacy Has Failed” comes running straight at you at a million miles an hour and bludgeons.

Not for nothing is this record called “Concrete Psychosis” as musically it is akin to being smashed repeatedly about the skull with a heavy block. It isn’t just heavy, it pounds you into submission.

On the title track – essentially just a massive wall of sound – vocalist Matthew Jenks screams, “it’s too late to win, to late to win, why have we given in to the scum that ought to perish” and it is absolutely clear that this is a band with a lot of anger to get out during the course of this record. Actually no, scratch that, it is a band with an awful lot of anger to get rid of. That there is a song called “This Is Fury” here is perhaps all you need to know.

If we may paraphrase the film “The Wild One” then on occasion it does seem that for Obzidian, it is a case of “what do you hate? What have you got!” And there is not a lot of light and shade here, more just dark and misery, but then isn’t that what the best music should be about anyway?!

“Chaos Catalyst” changes pace a little, in that you get a broken bottle in the face a little slower and more than before, and it has an opening that brings to mind early Machine Head.

Elsewhere “….Psychosis” has all the elements that Lamb Of God have at their most crushing and you can perhaps reflect that if Randy Blythe had grown up in Staffordshire instead Virginia, he may sound front a band like this, but equally the description of “a touch of Sabbathy doom with a hint of death metal violence” is accurate (that is if you take out the word “hint” because nobody involved in this record is hinting anything, this is pure unadulterated brutality.

Even as the record comes to a close, with “Vile” there is no let up, a discordant opening gives way to a lyric which sees Jenks “taken to places where I hate myself” in a track that is genuinely unsettling, it brings the curtain down an album that is not for the feint hearted, but one which is an extreme groove metal masterclass.

Now three albums into their career, Obzidian now have the backing of a reasonable sized – and specialist – metal label, they’ve made what appears to be a definitive statement of intent.