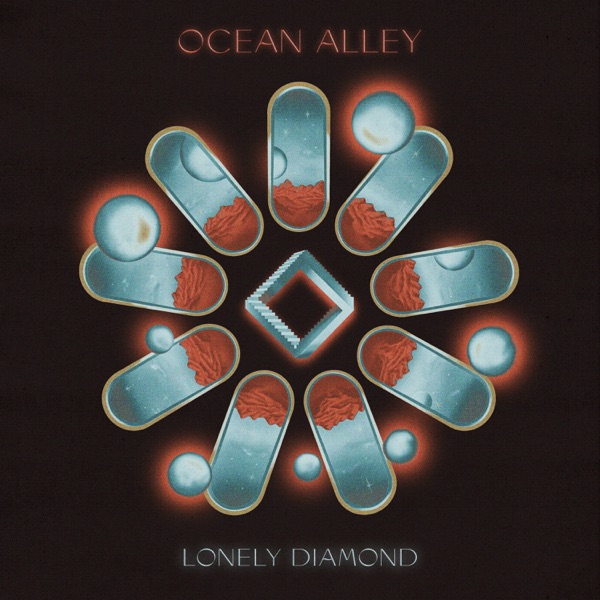 I always forget that being inundated with music from the UK, Europe and America that the Southern Hemisphere has produced some excellent bands over the years and some that I’ve been lucky enough to catch live such as Icehouse, Cold Chisel, The Church, Men At Work, AC/DC, INXS, Midnight Oil, Crowded House and Nick Cave and the Bad Seeds. Another making waves are Ocean Alley, an Australian alternative psychedelic-rock band from the Northern Beaches, Sydney.  The band is made up of vocalist Baden Donegal, guitarist Angus Goodwin, bassist Nic Blom, keyboardist Lach Galbraith, guitarist Mitch Galbraith and drummer Tom O’Brien. Their style of music has been described as “cruisey psych, rock and reggae fusion” and they have a new album released this month “Lonely Diamond”, their third and follow up to 2018’s “Chiaroscuro”

The album opens with `Dahlia` and it`s a sort of funky jam fest, an instrumental introduction of what`s to follow, a taster of sorts. There`s a wah wah guitar sound with keyboard snatches in this mid-tempo, quite carefree piece named `Tombstone`, with the vocals almost distant. It does have its rock out moments along the way a tale of discovery or a life journey.

I really loved `Way Down` it`s faster paced with some excellent guitar riffs, a melodic captivating uplifting ray of sunshine despite it`s foretelling of environmental disaster. There`s a mellow seventies chilled sentiment to `Infinity` that does seem to represent something that is boundless or endless.

`Up In There` is a ballad type love song that had me pleasantly drifting off as it progressed. The lyrics possibly relating the ending of a relationship. We get a similar feel with `All Worn Out` a piano led heartfelt deeply emotive number with a marvellous saxophone solo at the later end, another dreamy offering.

`Stained Glass` is a trippy kind of song with a message. The band have said the lyrics “represents trying to be true to yourself and not trying to put on any facade or wearing a mask if that’s going to be detrimental to your personal self”. The title track `Lonely Diamond` is another laid back hypnotic, entrancing quite thoughtful presentation, wonderfully chilled.

Another dreamlike submission follows with `Wet Dreams` before the spicier rockier `Hot Chicken` which mentions the Golden snake which either represents a relationship with spiritual matters or possibly difficulties with illegal substances.

The penultimate track `Puesta de Sol` or sunset is a mid-paced narrative seemingly a parable of a relationship with somebody who makes themselves unobtainable. The album closes with `Luna` or moon, an instrumental that has a dusky shimmering feel.

I did enjoy “Lonely Diamond” with its balance of high energy danceable funk fusions and the more thoughtful laid-back mellow offerings. Ocean Alley have been described as the musical equivalent of a drowsy and dreamy summer night and that`s a fairly good summation. There`s a groovy, quite retro feel about their sound with its spiritual swagger and heartfelt lyrics, the sort of band that would go down a storm at a festival.