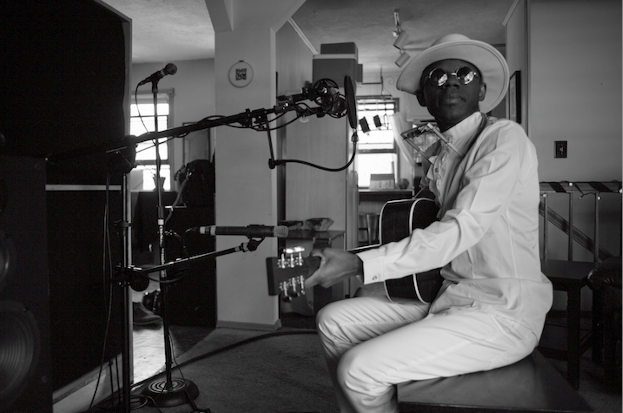 J.S. Ondara is a Nairobi born Minnesota based singer song writer, He won a Green Card lottery that allowed him to move to the United States. learned to play guitar from scratch, earned a major-label deal and opened up for artists like Lindsey Buckingham and First Aid Kit. His first album “Tales Of America” was released in February last year. The critical success of the debut led to a follow-up deluxe edition, “Tales of America: The Second Coming”, in September featuring the original plus five bonus tracks. There`s a new album, named “Folk N’ Roll VOL 1: Tales Of Isolation” a collection of songs written in direct response to the current global pandemic. The album was composed and produced by Ondara while in lockdown in Minneapolis over the course of a week and presents a refreshingly tongue in cheek take on what’s currently happening.

The album opens with `Pulled Out Of The Market` a stark track with just an acoustic guitar and vocals that captures the anxiety of the suddenly unemployed restaurant and factory workers. The lyrics call on Krishna and Jesus in this time of need and has some nice harmonica tinges and some overdubbed vocals nearing the end. A song that brought Springsteen`s `Atlantic City ` to mind.  There`s a similar mood to `Mr Landlord`, again harmonica, acoustic guitar, vocals and overdubbed backing vocals pleading with the proprietor for some leniency with lyrics such as “If I bake you a cake, will it help you forget, that I haven’t paid the rent, if I make you a meal, will it ease how you feel, about my delinquent bill?”

An imagined tale of getting dressed up and meeting a romantic interest for dinner follows with `Lockdown on Date Night Tuesday` some sweet harmonica shades and haunting harmonies towards the end enrich this gentle story. `From Six Feet Away` relates the difficulty of remaining close to family without touching during these difficult times, haunting stuff.

There`s a much faster pace to `Isolation Anonymous` relaying someone studying facts and figures and worrying about a second wave. Running water followed by hand claps and melodic vocals in `Shower Song` express a feeling of being stir crazy, “so tired of being inside”, due to the confinement.

A delightfully strummed guitar sets up a platform for `Pyramid Justice` a broadside against someone who seems to be all things to all men, the lyrics highlight the hypocrisy with “oh when the suit fits you are a …..Socialist, …..feminist” Another song of the endless tedium is shared with `Isolation Boredom Syndrome (IBS)` The feeling of being bored becomes tiring and is expressed in quite a languid manner.

`Isolation Depression Syndrome (IDS)` is understandably a melancholic piece of almost despair and longing for someone from whom you are separated from physically. The yearning is almost tangible in Ondara`s vocal delivery. There`s another harsh offering with `Isolation Blues (Blame It on the Pathogen) ` conveyed with strummed guitar, wistful vocals, additional vocal harmonies and harmonica splashes.

Running at over ten minutes in length `Ballad of Nana Doline` conceptualises the life of an ordinary elderly women lost to the pandemic, really heart-breaking stuff.

Ondara has expressed his admiration for his hero Bob Dylan and indeed he does sound a little like him at times.  This collection could have become a very self-indulgent, pompous, egotistical offering due to the circumstances in which it came about but the singer has said the inspirations behind the songs are pretty evenly balanced between personal experience and stories he heard from friends or the media. I`m sure it was very cathartic for him and it does seem to tackle most of the fears, dreams and indeed hopes we all have had during this period of forced isolation.