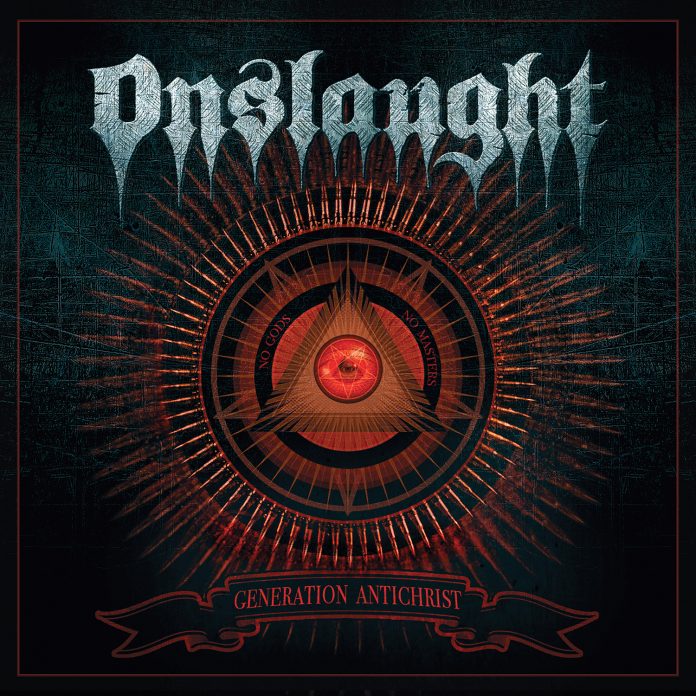 Legendary Bristolian thrash purveyors unleash studio album number seven a mere thirty-five years on from their debut.  Much has changed in the world but Onslaught continue to fight the good fight.

For those unaccustomed to the creation of thrash metal in the UK, Bristol’s Onslaught were a key figure in introducing and growing the genre from their inception 1982 to 1991.  The band reformed in the mid-2000’s and released three excellent albums during the British thrash revival of the time.  This is their fourth release since the re-formation, although as with many bands of a certain vintage, only one original member remains within the band.  That man is guitarist Nige Rockett.

After a gradual building riff on the album’s intro “Rise To Power” the thrashing gets off to a blistering start with “Strike Fast, Strike Hard”, a call to arms for all the disaffected souls in this modern world.

“Bow Down To The Clowns” follows with the anticipated intensity and urgency that has become the band’s trademark.  This track should easily make the end of year playlist for any self-respecting metalhead.  It is a ferocious, driving political stab in the guts to the ineptitude of world leaders.

All the requirements for a fine slab of modern day thrash are present here.  From the fast pulsating guitar work to the thunderous drums.  All the component parts you need to create a thrash album that pays homage to it’s roots but pushing itself forward have been put together here with no lack of skill and vision.

New vocalist Dave Garnett’s pipes are steeped and drowned in the very best of this genre.  The guitar work and interplay between Rockett and new partner-in-riffage Wayne Dorman is progressive and dynamic.  Bassist Jeff Williams and drummer James Perry are not here to make up the numbers.  Each adding their own skill and dexterity to the sound of Onslaught circa 2020.  Credit must also go to produce Daniel Bergstrand (Behemoth, Meshuggah, Dark Funeral) for capturing and enhancing the band’s sound without sacrifice.

The great thing about this album is that it is almost impossible to listen to it straight through in one go without wanting to go back and listen to the previous track again and again…………………………..and again.

Religion gets a well-deserved Slayer-esque kicking in the form of the title track “Generation Antichrist” and the brilliantly brutal “Religiousuicide”.   A track that should now be the atheist anthem of choice.

The album closer comes in the form a re-recorded version of “A Perfect Day To Die” which was originally released last year as a stand alone track.

Overall, one is left with ear splitting impression that this could well be, or should well be,  the thrash album of the year.

Generation Antichrist is out now via AFM Records