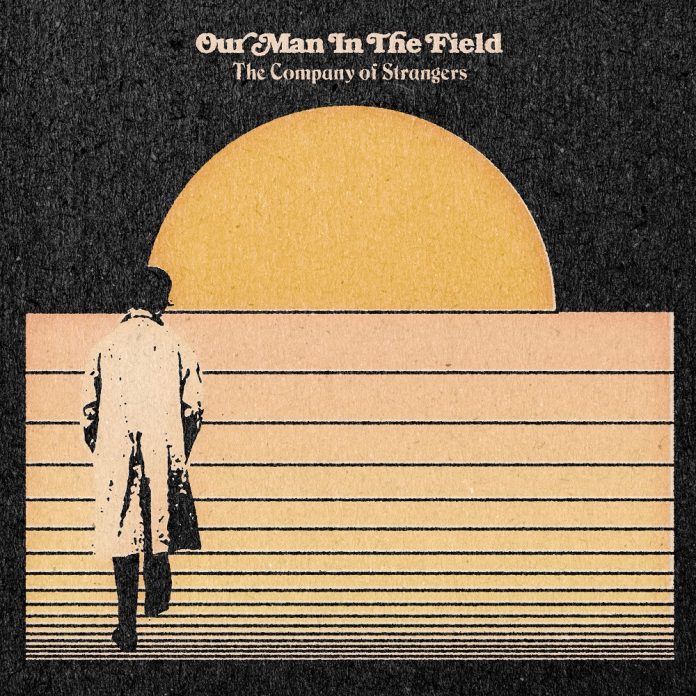 Our Man In The Field is essentially singer-songwriter Alexander Ellis who grew up in Saltburn in the North East of England but now bases himself in London. He writes musical snapshots from the lives he`s observed or the life he`s led. These tend to be heartfelt dispatches from his travels, resulting in songs rife with spacious guitar melodies and innately hummable hooks. It`s been a while coming but he has a debut album “The Company Of Strangers” ready to present to the world.

`Thin (I Used To Be Bullet Proof) ` kicks off the album and the first thing you notice is Alexander`s delicately shared vocals. The song was written from the point of view of a person looking back on their life and recognising how life has changed them. The brushed drum and piano keys all add to the ambience of this stunning track but it`s the addition of the superb pedal-steel guitar playing from Danny & The Champions’ Henry Senior that sets this apart. Initially, there`s a slightly jazzy feel about `I`ll Be Gone` with the stand-up bass but with the addition of the pedal steel and brushed drum it gathers a more Americana texture.

`Elanor’s Song` begins with some intricate guitar chords being picked before the bass joins in alongside the pedal steel to lay a background against this tale of being there for a friend in a time of need. There`s a real simplicity about `Easy Going Smile` with a strummed guitar and a banjo refrain running throughout this account of a relationship falling apart. Alexander`s voice at times soars over the music and is a real joy to behold.

`It Is What It Is` is a more countrified composition with banjo, pedal steel, brushed drum and strummed guitar leading us through this more melancholic offering which seems to narrate a near despondent acceptance of how things are or have turned out. The song almost halted a couple of times for a rendition of the line “ And it is what it is, do what you do, don`t mind me, I won`t mind you” quite heart breaking. There`s a slow intro before `Swansong (Don’t Play With Matches) ` takes off at pace, strumming along relating the dangers of straying from a stable relationship.

`It Was Ever So` is a tender tribute to those left bewildered after the closing of London’s oldest fire station in Clerkenwell in 2014 and what awaits those displaced. Another break up song comes with `Stick Around` which seems to convey a sort of despondency over the inevitability of the situation. The pedal steel giving it a further sense of hopelessness.

I really don`t know why but `Pockets` put me in mind of Van Morrison`s `Sweet Thing` not quite musically but possibly the sentiment of being in a fresh, rewarding, confident relationship. The line “you can live on my shoulders, you can rest in my arms, you can hide in my pockets, I’ll keep you safe from harm” really summed it up. There`s a sunny, upbeat offering with `Don’t Speak` which employs just a picked acoustic guitar which accentuates Alexander`s dexterous vocal range.

The album closes with `I Like You So I’ll Kill You Last` a harmonica led number that seemed out of place until I read somewhere that it was written for the end credits of film that the singer had appeared in.

“The Company Of Strangers” is a really remarkable premiere, with songs that reflect on relationship beginnings and breakups, social injustice, and simple life observations. The album has a folk / americana feel and with the singer`s varied and rich vocal range I was reminded of the intensity of New Hampshire folk/blues artist Ray Lamontagne and other superb singer songwriters such as Nick Drake, Foy Vance, Damien Rice, Iron & Wine and Luka Bloom. Not so much company of strangers but company of brothers.