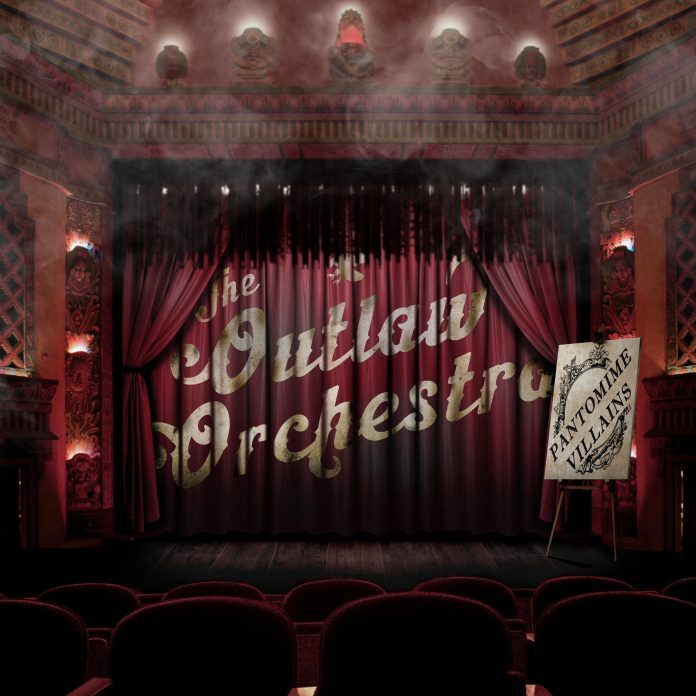 In honour of the name “Pantomime Villains” I feel like this review should start with the words: Outlaw Orchestra are from the deep south, they are the sons of itinerant cowboys who make their money going from town to town playing every Honky Tonk and Bordello they can find, road dogs of the dusty trail, with a song in their hearts and a nose for trouble in their soul.

Well not unless you count Southampton as the Deep South anyway (its south of here and whenever I’ve been there for football they always appear slightly odd, so I am prepared to go with it).

The rest of the opening paragraph might well apply, to be fair.

The first of these things, “Take A Bow”, plays it quite straight. There’s banjo’s, there’s the air of a barn dance in a back alley and there’s lyrics about “Tennessee Moonshine”, but by and large, this is the sort of good time, good ol’ boys, Country rock n roll that you can hear anywhere from Kentucky Headhunters downwards.

And whilst it would be wrong to say that it suckers you in, there’s a definite suggestion that the rest of it is done rather with tongues in cheek. The title of the next one “Chicken Fried Snake” probably gives it away. That said, it is a swaggering good time, in fairness.

Pete Briley – clearly a bit of a banjo whizz – ensures that “Hangin’ Tree” is as raucous as a chase in Wacky Races, or when Luke and Bo were trying to stay out of trouble in Dukes Of Hazard.

The mention of fictional characters is deliberate too, given that a little like Bootyard Bandits, it feels like Outlaw Orchestra are playing a role here, more than most.

“Whiskey Drinking Liar” is a neat piece of self-deprecation (there are other moments) but one with a little more nuance than many of them have, the piano led middle section is a welcome diversion for example. “Arabia” sees them go on holiday, “where’s my camel when I need one?” is surely one of the more esoteric questions ever asked in a song (you are tempted to say that it will be in the last place you look) and rhyming “librarian glasses” with “big fat asses” is worthy of applause.

Credit to them too, for a couple of diversions that “….Villains” takes that get it a couple of extra marks. “Jumpin’ Jive” has a proper, authentic 50s thing going on, you can just about see The Stray Cats doing this, the bluesy ballad “It Happened Again” is a laid back slice of Allman Brothers type stuff. It just so happens that rather than spending the money on bills, he spends it on guitars. “We won’t make rent this month and we can’t feed the cat, but I bought a Les Paul, sorry, honey,” is much fun.

“Voodoo Queen” is another of the pleasing diversions. Proper jazz, the bordello in prohibition era, and I am surely not the first or last person to think of Urban Voodoo Machine when I heard it.

If that is close to the best thing here, then “Too Much Willie Nelson” might be the pick. An ode to smoking too much, well, Willie Nelson that ends with the glorious put down: “you ain’t Willie’s shadow, no, you’re just a poor man’s Johnny Cash”.

The record itself ends with “Send Some Whiskey Home” which rather shows Outlaw Orchestra in their entirety. Fabulously played and delivered with class. It’s first line “I wish you loved me like my Dog does….” Is proof that they are never going to be the type of band to take it too seriously (in fairness, I think he means unconditionally…..least I hope that’s the meaning!)

Outlaw Orchestra are pretty much everything that name says they are. Excellent musicians, who aren’t playing by the rules, and “Pantomime Villians” is a role that suits them just fine, actually.