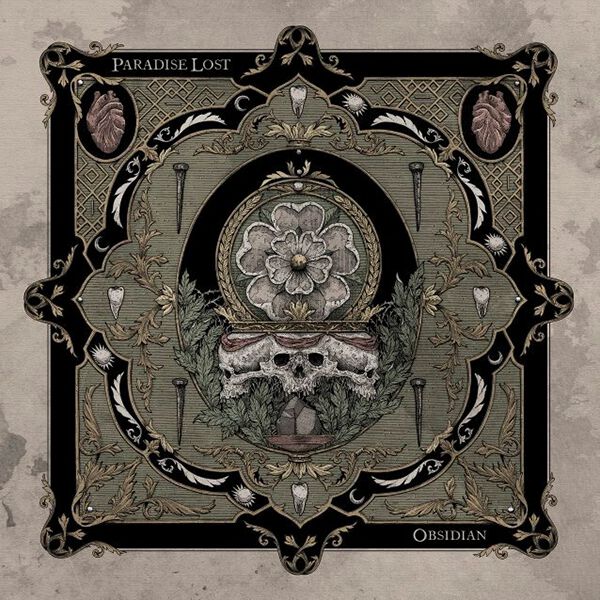 Everyone always talks about the “signature sound” of bands like Status Quo, Iron Maiden or AC/DC and that’s great (as are all three bands, by the way) but try as I might I can’t recall a band that has had quite the career trajectory that Paradise Lost have.

I can only approach “Obsidian” in a personal way, because in a way, they have always been personal to me. They were – they are – a touchstone band.

I used to buy Raw Magazine religiously, and they had a Sampler of some Music for Nations bands on the cover once. I’d never heard anything like PL before. I was a glam kid. I was about 16. I never actually owned Spandex trousers, but only because I was too tight to buy a pair. Skid Row never sounded like this. I loved Maiden by then, but in honesty I probably heard PL before I heard Sabbath.

To be truthful, Paradise Lost were probably the heaviest band I ever liked. To this day, there are only two “proper” heavy bands I like (by that I mean ones where the vocals aren’t always “clean”). Them and My Dying Bride. Which is why the career path of PL interests me so.

Because I don’t know of another band who – after 30 years – did the “mainstream” thing (both “Draconian Times” and “One Second” hit the top 40, and then basically went, “yeah, you know what? We are going back to being heavy as hell again”.

Which is what they’ve done roughly for the last decade or so, and while saying something like “and they’ve never sounded better” is glib to the point of banality, it’s actually true.

“Obsidian” is another such record, to be truthful, because there’s no one better at this in the world.

“Darker Thoughts” (and you imagine Nick Holmes has no other kind?) could only be them. It builds all fragile and melodic, while there’s gorgeous strings over the lyrics: “This one way street you’re on is gonna get you killed….” Then it explodes. As heavy as a concrete block to the head, and yet, it is different to “Medusa”, the last album they put out about three years back.

It’s ferociously heavy, yet it is more nuanced. There’s plenty on here that New Model Army might have put on last years “From Here” record, say, and its as goth as it is metal, if you want an easy hook.

Greg Mackintosh has long been one of the best guitarists there is, but he has excelled here, he really has. There are so many melodies on the record – the chorus for “Fall From Grace” is catchy even – and whatever this does, it doesn’t have anything particularly epic or Labyrinthian.

The last time I went to a club was about 1998 (and the girl I took went home with someone else….) so I don’t know if goth clubs are still a thing. If they are, then the brilliant “Ghosts” is surely a new anthem, made from going over old ground. A real high-point, it is one of many here on this glorious collection.

They always manage to sound eerie. You can imagine whatever Nick Holmes sang he’d never sound happy, but even for them there is something unsettling about “The Devil Embraced” and the choral opening only adds to the level of foreboding on “Forsaken”. Perhaps best seen as a bridge between “One Second” and this stuff, it is arguably the best thing here.

“Serenity” actually threatens a proper metal gallop at one point, and if they play it live, you can imagine it going down brilliantly in a festival field, and if “Ending Days” ramps up the goth stuff just a little, then special praise must be given to the rhythm section of Stephen Edmondson and Waltteri Väyrynen, who are brilliant throughout and subtly so here.

The four minutes of “Hope Dies Young” are basically a masterclass in how to make the inaccessible accessible. Light and dark collides here. The same can be said of the whole album, but as Mackintosh’s keys (he has a second string to his bow) open “Ravenghast” it is almost as if they are barely bothering to hold back the evil within.

In an interview that I ran on this site, Holmes proclaimed himself to be “happy” with “Obsidian” and well he might be, seeing as it is without question the best metal record released this year so far.

I find something strangely comforting about Paradise Lost. If The Beach Boys, say, are synonymous with fun, fun, fun, and ladies from America’s West Coast, then surely this is the sound of the Yorkshire Moors in the morning. In November, with a mist rising, drizzle in the air and a cold in the bones.

In short, then, the world is exactly as it should be. And what a signature sound that is, too.