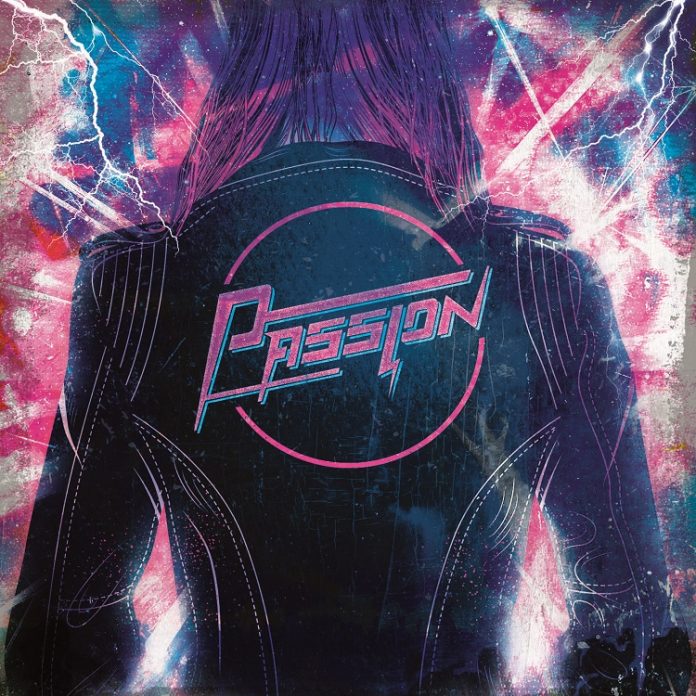 First off, hats off to Daniel Rossall.

The singer of Night By Night for a couple of years in the early 2010’s (they were pretty good, actually, but that’s not the point), he’s resurfaced here under the name Lion Ravarez, which might be the greatest stage name that anyone has ever given themselves.

Whatever, he’s roared back (see what I did there, it was really clever….) with Passion. And he’s clearly passionate about it too (I will stop now, I promise).

And what “it” is, is simple. Basically, imagine a world where it was 1986, Bon Jovi topped the charts, and bands like Danger Danger were getting ready to form with ideas like “Slipped Her The Big One” still in their notepads (and that, if you are under 35, is genuinely a title from a track on their second record – it was a simpler time…..). This was a world where it was ok to wear Spandex, where all videos were done in a fake live setting with a load of heavily made up ladies in the front row desperately trying to get with the lead singer, a world where it was encouraged to write lyrics of the most sleazy kind and a world where rock was big, brash and as full of testosterone as a modern day Russian athlete.

If that sounds like fun to you, then strap yourselves in, because I am here to tell you right now that Passion is the best attempt at this in years and years.

“Intensity” the opening track, had been good enough. Like something on Jovi’s second record crossed with a fists in the air power metaller, but when the solo hits…..man alive! That world of 1986? That was the world I grew up in, the music I loved, and when Chance Vanderlain does his rock god thing, it should bring the house down, it really should.

“Trespass On Love” proves this is no fluke. It also proves they’ve listened to a lot of mid-period Whitesnake or early FM, indeed, it’s tempting to imagine Overland on the phone to the boys going: “damn, someone’s stolen our song here….”

The glorious, the wonderful, the downright best thing about this is that Passion do. Not. Care. Less. They have precisely no interest in what’s “cool” or “hip” or what the latest cover star on Metal Hammer is doing. They just want to play rock n roll like “Too Bad For Baby.”

“Lost In The Dark” is sort of an AOR ballad – the harmonies alone are higher stacked than platform shoes in the 70s – except that the four piece can’t be arsed with ballads, and Ravarez can hit notes that the rest of us wouldn’t find with a stepladder. This baby soars.

I know I m supposed to talk about late and shade and nuances and whatnot, but in actual fact, this is just a wonderful hard rock record. “Back” (“the girl’s on fire and ready for action” is typical of the lyrical content) does add a touch of Cinderella to the mix in that it is bluesy, but largely work like “Victims Of Desire” takes the ideas of 1989 and doesn’t even update them. It just does them again, for kicks.

“We Do What We Want” is perfect. However, it’s first line “it’s 10 o’clock, the night is young” rather neglects the fact that the target market here (people my age, to be honest) are ready for bed at 10pm listening to the World Tonight on Radio 4 these days, never mind getting ready for a night on the town (ok, I might be judging everyone by my boring standards here, but….) and if by this stage in proceedings you still need me to explain what “Built To Please” sounds like then this isn’t the record for you.

If however, there’s anything at all inside you that thinks an AC/DC flavoured song called “She Bites Hard” and about exactly what you think it is, seems like fun, then step right up, and just to complete things, underline everything, and dot the I’s, then “Big Game” does the same thing. Just as well.

A few years ago a band called Silvertide released a record called “Show And Tell”. They toured with Kiss, were seen as the boys to to make this stuff big again, and never quite did. I have no idea whether Passion will either, but I can say the following with certainty.

“Passion” is the very best 80s sounding hard rock record by a new band for years. It won’t be for everybody (but that was always the case with this type of thing), but if you still long for the days when Bon Jovi weren’t shit, if you are hoping the Motley reunion thing gets here just to see Poison, or if you are going to see Tom Keifer play this summer not for ironic reasons but because you still love Cinderella’s tunes, then I swear to you, get on this now.