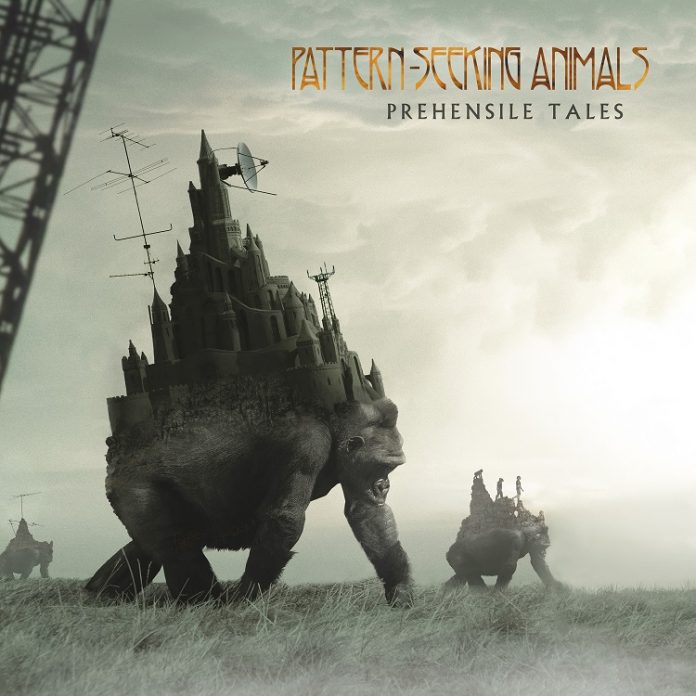 Being a sad, lonely man, I spend a lot of time looking at the Discographies of artists. This means I am well practiced in social distancing to be honest, but it also means I can tell you things like Bob Dylan released two albums in 1964 – belters too. None of that years and years between records thing we get these days.

Pattern Seeking Animals are a pleasing throwback in that respect. 11 months or so after their debut, here’s the second. So rare, in truth, is it that two records should come out in such quick succession, that, to be totally truthful, I assumed “Prehensile Tales” was some stuff that was left over from last time, maybe a remix or something.

Nope. Rather it is another collection, as keyboard player John Boegehold explains: “I started writing for the second album right as we were finishing up the first one” says Boegehold, who is again producing. “I wanted to change around some of the songwriting approaches I’d been using and draw from a few different musical influences while not straying too far from the overall vibe of the band. Adding a few new instruments to the mix was part of the equation.”

And he’s done that, because while it is just as good, just as classy as the debut, these are very different “….Tales”.

Now, as much as you don’t like to go down the obvious route, it has to be said that three quarters of PSA are Spock’s Beard. I wouldn’t normally mention such a thing (I did a review last week of a band containing Mark Knopfler’s son and didn’t say because it had nothing to do with their sound) but here, because singer Ted Leonard has such a distinctive voice, you sort of have to.

Plus they play prog, but PSA have little to do with the other mob beyond that – there’s a bit of course, so they are Spock’s goatee if you will.

Instead, appropriately for something called “Prehensile Tales” this swings. They have added plenty of new songs this time. Horns and a really funky sheen to the brilliant opener “Raining Hard In Heaven”. It is safe to assume the musicianship is from the top drawer throughout, but some of the guitar tones of Leonard are as good as his voice – and I cannot pay them a higher compliment.

Boegehold anchors “Here In My Autumn” down with his keyboards, and its noticeable that even for an eight minute track there is plenty of crunch here. “Elegant Vampires” uses strings cleverly and gives bass man Dave Meros his moment in the spotlight. The lyrics are dark too, which is at odds with music. This is the shortest and sharpest of them. “Why Don’t We Run” is interesting, with its Asian and Eastern influences, it has a folky feel, as if it is being sung in some after-hours back street bar as the sun rises in the morning.

This is a collection you can lose yourself in, generally speaking, but never is that more true than in the wonderful 17 minute journey of “Lifeboat”, which twists, turns and spins, but more than anything forms the centrepiece of the record.

That said, “Soon But Not Today” is perhaps its jewel (I should add the words “this time” perhaps, as you get the feeling that this is an album that will reveal more each time), but there’s something about the Trumpet filled ending, kind of Beatles flavoured, that is just beguiling. And Leonard’s guitar solo, here is fabulous. You can almost hear the credits rolling as it plays out.

So album number two is a different beast, but it’s just as good – and that’s no tall tale. What it does mean, though, is that they’ve set a precedent. Album number three in 2021, lads? No pressure.