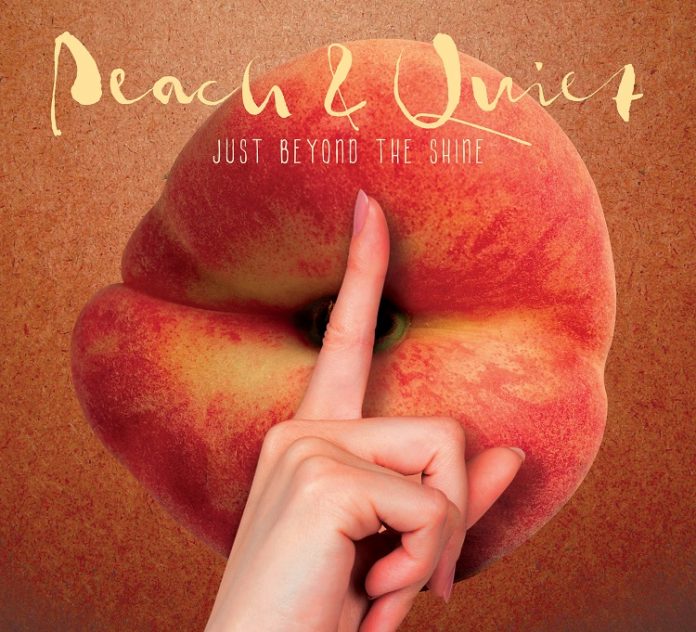 Many years ago I used to work in a bank. One of the things I used to do was put the new accounts forward for cheque book printing, which probably dates how long ago it was.

Anyway one day a joint account was opened by a Mr Wallis and a Miss Grummitt, meaning their cheque book was named “Wallis And Grummitt” which was enough to keep me amused all day. In idle moments I wonder if they are still together.

Which is partly why I got so excited when this album turned up. For one brief moment I thought Mr. Peach had got together with Miss Quiet to form an incredible duo.

They haven’t, which is a shame, as Peach and Quiet are a Canadian duo – Heather Read and Jonny Miller (they are real life partners) – but no matter, there is something seriously bewitching about the sounds on “Just Beyond The Shine”.

This is their debut record, but it doesn’t sound like a first step in any way. It is assured, confident and warm. And, actually, the two are stalwarts of the British Colombia Scene.

They are clearly masters of the craft too, given the words and music aren’t quite what you’d expect. Listening to the shimmering, Laurel Canyon flavours of the opener “Empty To Fill” is one thing but then you get to the line “open me slowly, then you will find, eternal darkness and infinite light” and you find yourself musing on the duality of man. The guitar solo comes out of nowhere, as if to jolt you from that reverie, but make no mistake, there is a lot more where that came from.

Backed by a team of Canadian musicians from the top draw, “For My Love” and its understated harmony is simply gorgeous, and there’s a real catchiness about some of the more folk ones. “California Way” sees Read – Welsh born – take the lead vocals to superb effect, and there’s a darkness, emphasised by the eerie Lap Steel about “Shoreline After A Storm”, which seems hewn from the rugged landscape.

Nothing here is too long, either, which is interesting in itself. “Lucky In Love” sung by – and penned by – both has a widescreen intent, but like most is around the three minute mark, “Will You” a little more plaintive and questioning, as if it was written late at night wrestling with demons is classy, and “There’s A Very Chance” sung together as a two part harmony perhaps exemplifies the chemistry between the pair.

“Flowers Grow” shows the individuality here. A Glockenspiel (played by Steve Dawson, who also Produces) adds a haunting uncertainty, while the album’s only cover, “Seven Daffodils” shows them to be fine interpreters of songs, too.

The key to this is the location. There’s always something original, individual and superb about Canadian roots music. So much of it comes from over there. On this evidence, Peach And Quiet belong in the top draw.

Everything on “Just Beyond The Shine” is tasty, juicy and definitely needs shouting about.