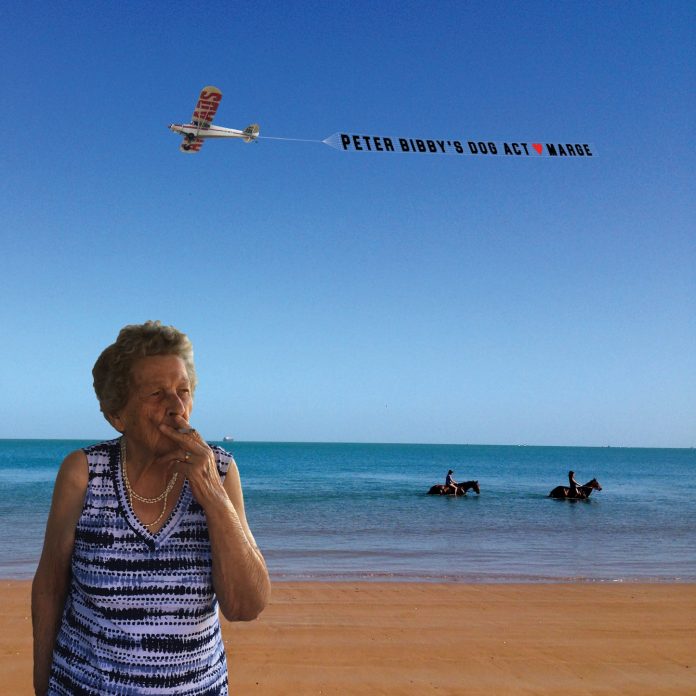 Who is Peter Bibby you may ask, I certainly did? Well the answer is Western Australia’s own cult rocker. A key musical cult figure, who with bandmates bassist “Strawberry Pete” Gower and drummer “Dirty Dave” Taylor packs out rooms all over the country with barely a whiff of radio or mainstream media support. He`s just about to release “Marge” his third album following on from 2014’s “Butcher/Hairstylist/Beautician” and 2018’s “Grand Champion” The sleeve of his new release “Marge” has a photo taken of bandmate Dirty Dave`s grandma Marge and it`s, according to Peter, a good visual representation of the music we had created, a nonagenarian standing in front of a deep blue sea, enjoying a deep pull on a cigarette.

The album opens with `I`m on Fire` not a Bruce Springsteen cover but a countryfied ode to a gangster with Biddy`s laid back almost spoken drawl offered up alongside a stripped back acoustic guitar accompaniment.

There`s distorted guitar chords and an almost hypnotic beat to `Oceans` which started out as a sea shanty-esque poem scrawled on a bit of paper about going mad on the ocean, whilst drunk and thinking of pirates. It`s wonderfully anarchic and quite mesmerising.

`Poppin` Dhookies` is just under two minutes of classic instrumental surf rock at it`s best, a number i`m sure Dick Dale would have been proud to call his own.

We get a couple of quickies so to speak with `Undereducated` and `Tin Tuna` The former a real 1,2,3,4 speed punk offering and the latter a raw rocky off kilter swagger, both short and sweet.

`Batteries` has birdsong and a dog barking before it takes off on a noisier anthemic path. The track plays out the last minute with the line “can`t get you outa my head” repeated like a mantra.

Another brief outing comes with `Stressed` which is really what is says on the tin, under a minute of trauma and mayhem.

`Your Mum` is a bit of an odd one, the vocals at times have a real heart ache about them while musically it sways like a drunk from ballad like passages to rock, with a nice reggae vibe interlude before returning a garage rock edge for the last minute or so, weird but wonderful.

At just under eight minutes `Craigeburn` is a real journey of sorts with eclectic intricate guitar riffs, then almost tribal drumbeats, more grungy guitar chords and at times it has a sort of country feel, a song that really needs to be listened to.

The album closes out with `Calcium` not a curve ball as such but certainly one of the more immediately accessible tracks with an underlying piano accompaniment throughout. A song that incorporates references to vitamin supplements and the dairy industry, you couldn`t make it up.

Peter Bibby own face book page states that he writes tunes and sings them like Shane McGowan lost in Kalgoorlie screaming at bleeding laudanum and typhoid hallucinations and strums the guitar like a dog drunk on rum. A pretty fair summation in my opinion. I certainly wouldn`t spend too much time analysing this fella but would suggest just sitting back and enjoying the turmoil that ensues. “Marge” is a cracking release, pure organised confusion. I feel duty bound to allow Peter to conclude this with his reply when asked about being a troubadour, a maverick, a rule breaker. He replied “You’ve got to be the guy you need to be to have the time you want to have. Honesty, sincerity, and a sense of humour are a few things that drive me. ‘Don’t be a dickhead’ is another one”. Says it all really.