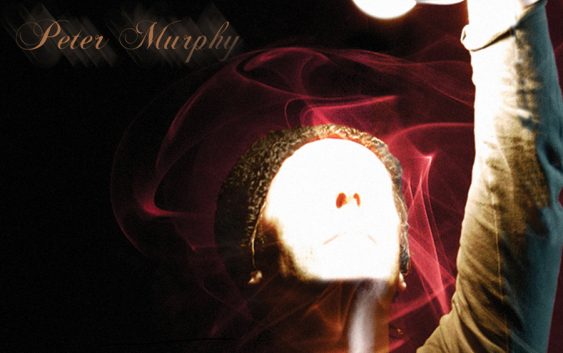 I have to say I’ve been fortunate enough to witness, to give him his full name Peter John Joseph Murphy fronting the wonderful Bauhaus numerous times and latterly a few of his solo outings, which always tend to be a little deterrent each time. I also really liked his side project Dalis Car with the late Mick Khan, so I was delighted when his latest offering arrived.

‘Bare-Boned And Sacred’ is a brand new live album recorded in New York during Murphy’s 2016 ‘Stripped’ tour, which he performed as a three piece with John Andrews on guitars and Emilio Zef China on bass and electric violin.

The album is a sort of retrospective from the 10 solo albums he has produced since the break up of  Bauhaus in 1983.

“Cascade” the opening track is an interesting choice with Murphy’s words “We have no image, we’re just called good friends” almost spoken over a steady but solid backing. “Secret” is a very poignant track which starts with a strummed guitar followed by Murphy’s wonderful heart wrenching vocals. Which works so well. The electric violin adding a haunting quality as it joins the song three parts of the way through.

The next number “All Night Long”, was one of the stand outs for me and this almost sexagenarian proved that his still has the vocal chops to own a terrific song like this. The songs flows so well and isn’t even interrupted when the songs changes to French half way through, marvellous.

“Marlene Dietrich’s Favourite Poem” from the successful 1989 Deep album is a very evocative piece of work and gets across almost the loneliness and sadness of Dietrich’s later years.

One of my top ten albums of all time is David Bowie’s “Hunky Dory” so it was interesting to hear a cover of the “Bewlay Brothers” track from this 1971 release. The name The Bewlay Brothers was a pseudonym for Bowie, Iggy Pop and Colin Thurston while producing Iggy`s Lust For Life album and Murphy does a really close and respectful version of the original, even down to the haunting harmonies towards the end of the song.

Another track from Deep is next with “A Strange Kind of Love” and this is an astounding musical offering of a breathtaking love song and left me a little teary after it finished.

“The Rose” from the last release Lion in 2014, is a sort of symphonic romantic ballad and works well with the violin chords almost echoing in the background.

At some point, history would have to be acknowledged with Murphy’s legendary band Bauhaus always looming large in the background. But what a subtle way it is addressed in a Bauhaus Melody comprising an unusual choice of “King Volcano” and “Kingdom’s Coming” from Burning From the Inside and “Silent Hedges” from The Sky’s Gone Out albums. No Bela Lugosi’s Dead or She’s in Parties, the obvious choices but this ménage à trois of numbers works so, so well.

Another love song of sorts “Never Fall Out” follows and highlights the wonderful vocal range of the artist with the song predominantly just stripped back voice and guitar.

“Gaslit” is a strange track. The lyrics are written from the point of view of a sort of outsider, looking in. A steady beat with Murphy’s voice thrust over and hauntingly beautiful electric violin snatches adding to the atmosphere.

The pernulamate track “Lion” is another off kilter tune, straightforward but a little unerring and unnerving in its simplicity and effect.

“Your Face” comes from what was probably the singer’s most Middle Eastern musically influenced album, the brilliant Dust. The track has a heartbeat, a pulse that beats throughout this superb track.

It’s eerie, otherworldly and wonderfully ethereal and a fantastic way to close out this work of genius.

This was not what I was expecting when I started listening. However, I was really blown away by it and spent the time overwhelmed by its at times simplicity, complexity and beauty.

Sadly I can’t see this winning any new admirers but this is a pure masterclass from a much underrated performer who is trying to not rely on former glories and is a timely reminder as to how good his solo catalogue actually is. Stunning is how I can describe it. If there is one album that you want to invest in this year, let this be the one.

It may be called `Bare–Boned and Sacred` but this album has become hallowed to me.