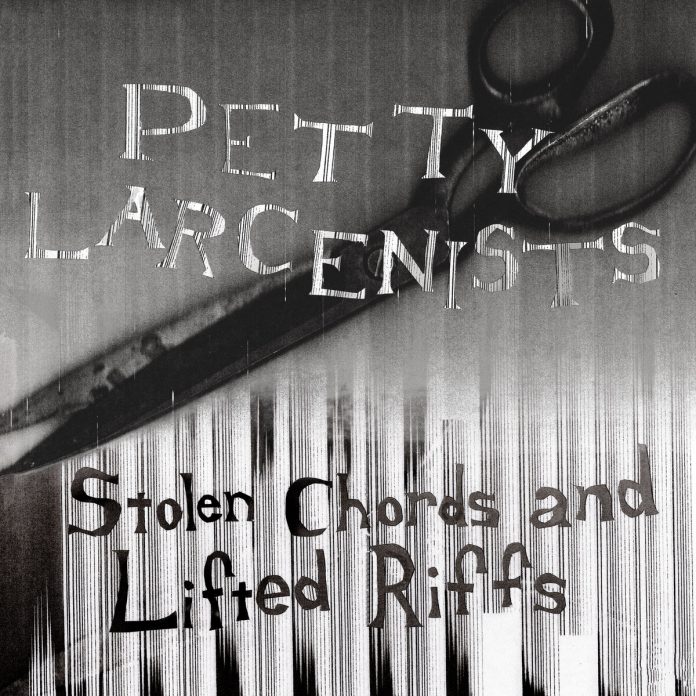 I have never, it must be said, missed an opportunity to make a crisis out of a minor drama.

Such is the way when you are blessed with a herculean ability to panic, and massive temper.

Which is probably why “Make This Ugly” – the opening track on “Stolen Chords and Lifted Riffs” – resonated with me more than it should. “Let’s pour kerosene on these flames, let’s call each other names” sings Jesse Thorson, the man behind Petty Larcenists.

I am of one of the latter – and it happens to me about twice a week -but to be truthful, no matter what he’d said in the first song, I’d have listened anyway, because a huge bass rumble and a Cheap Trick-ish riff would always get a repeated play.

Petty Larcenists is a new project for Thorson, and the details that came with it suggested that it is an amalgam of all his previous bands. It’s time for honesty here. I haven’t heard Slow Death and Pretty Boy Thorson and The Fallen Angels, so I couldn’t make a comment on that.

What I do know is this: If The Hold Steady (they, like Thorson are from Minneapolis but its more than that), Pkew Pkew Pkew and Gaslight Anthem ever got together one drunken night and made an album of rock n roll, then this is that.

“What Now” is perfect low slung, blue-collar stuff. The solo soars and the bit on the bio where it says “While there are bands who have celebrated more widespread success, or crossed over to the mainstream, few can hold a candle to what Thorson does”, you know the bit that you had originally dismissed as PR fluff doesn’t half stick with you here.

“The Last Time” is power pop, but where that is usually sugar-coated, then this is tinged with the dirt of the heartlands, but still has a tune and a half to go along with it.

“Tiny Plastic Bags” has a more epic feel than the usual two and a half-minute stuff. It’s lugubrious chug recalls The Augustines a little. “There’s no hope for this, that I can see….” He offers here and “….Riffs” does beat with a much darker, bleaker heart than many of his peers.

Indeed, just when you think this couldn’t get any cooler if it tried, then it does. “Getting Was Good” is like a lost Thin Lizzy song, it really is, while fans of the wonderful Marah records of 15 years ago can get a little nostalgic about “Know What I’m Saying”.

“Grown Man’s Tears” would in other hands be a ballad, but thing about the emotional sort who likes a row is that, if we’re honest, we enjoy the pain, so this is almost a celebration of the fact she’s dumped him again. It doesn’t even matter who she is. It could be anyone. But tell me, when the solo hits, that everyone here isn’t happy deep down.

As superb a half hour as you can possibly conceive ends with “I Can’t Get High” – which sounds like he’s still going to anyway, if we are honest with each other.

“Your new favourite band” is one of those bullshit clichés things that means nothing, like that other phrase “legend is overused but…..” so I’ll steer clear. However “Stolen Chords And Lifted Riffs” is proof of the fact that occasionally, there’s a genius you’ve never heard of. So yeah, Petty Larcenists, they’ve pulled off a massive great heist in truth.