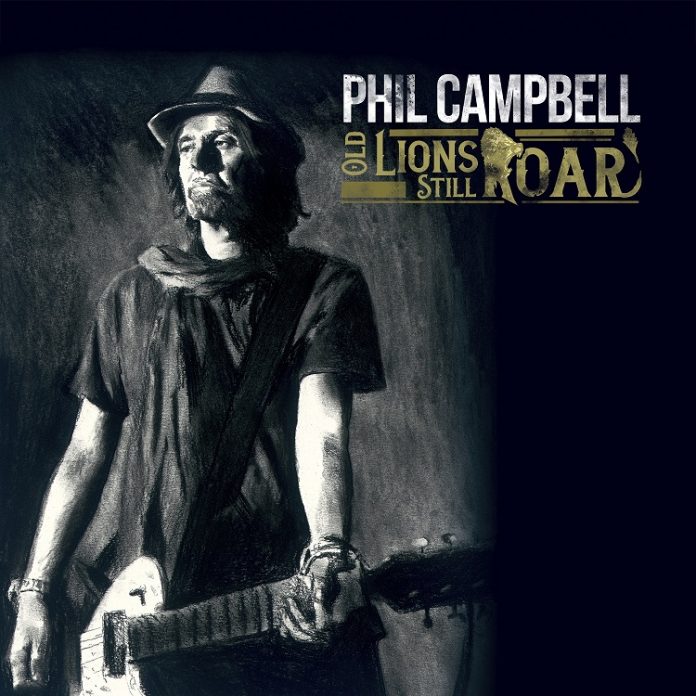 When you live (note the word, its not a mistake) music you have to keep on with it. You don’t just “love” music. It is your companion, it knows your thoughts, it knows your hopes, your fears, your dreams.

My dad keeps a diary. Has done all his life. I don’t need to. I know what records I listened to at any point of my life, the record collection stacked up on my walls is as important to me as anything. This website has, for the last five years, provided an expression of what these sounds mean to me.

Some of you reading those words might get it, might even feel the same way. Even if you have no idea what I am talking about then I am prepared to bet that Phil Campbell gets it.

In his case, the in-built need (not desire, it goes deeper) to create, to perform, to entertain, it burns.

How do we know this? The chorus for “Rocking Chair” – the opening track on his debut solo record – says so: “I am not sitting in no rocking chair, I am playing in a rocking band, gonna play to whoever’s there” it goes, and its then. Right there. That you understand how important this is to him.

The person singing it is interesting too. Leon Stanford from The People And The Poet does a fabulous job here as the first of the special guests (and with the greatest of respect to him, he may be the one that not everyone knows here, although TPATP are a fabulous band.

See, 30 years or whatever it was in Motorhead guarantees you one thing: it means when you, as Phil puts it himself “write a song with a particular vocalist in mind and see if they’d like to collaborate” they’ll probably say yes.

So, without overstating it, when you write a proper Priest-esque rocker, Rob Halford will sing it, like  he does on “Straight Up”,  and when you write something that sounds like Orange Goblin called “Faith In Fire”, Ben Ward is only too willing to wrap his lungs around the thing.

What is interesting here – and actually makes this better than when Slash did something similar – is that these songs suit the singer and show the incredible versatility of the guitarist himself.

Take the one he does with Alice Cooper “Swing It”. It is a brilliant Alice Cooper song, simple as that, and the same goes for nearly all of these. They are fantastically well thought out and fabulously conceived.

The one with Nev McDonald (and I know he’s in Hand Of Dimes these days, but he’ll always be Skin’s singer to me, sorry Nev…) is a brilliant vehicle for his incredible voice, and “Walk The Talk” features both Nick Oliveri and Danko Jones (and Phil Campbell, natch) so it wasn’t ever going to be anything other than a rock n roll extravaganza. And it is. It really is.

The best, though – and given the competition that’s some accolade – Dee Snider’s “These Old Boots”. He’s a force of nature at the best of times, as anyone who saw his Bloodstock performance this year, will attest, but here….even by his standards, he’s special.

Whitfield Crane gives it his best on “Dancing Dogs (Love Survives)” the two are friends, the Ugly Kid Joe frontman sang with Phil and his bastard sons when the bands toured together, and the one Benji Webbe is on – a piano led ballad, “Dead Roses” shows his talent as a singer, which is often overlooked becuse he’s such a frontman.

The last one, is pure Campbell. Well, actually, its pure Campbell and Satriani. And the two trade the most gorgeous acoustic licks you can think of on “Tear From A Glass Eye.”

And there’ll be a tear too, at one of the lines in the aforementioned opener. “I want my best friend back, just to play one more time…..” and yes, he’s talking about the great man, but he’s also nailed grief.

The thing about grief is, you have to make the best of it, and that’s what Phil Campbell has done, first with Phil Campbell And The Bastard Sons, now this. “Old Lions Still Roar”? If they have this much talent, try and keep them silent.