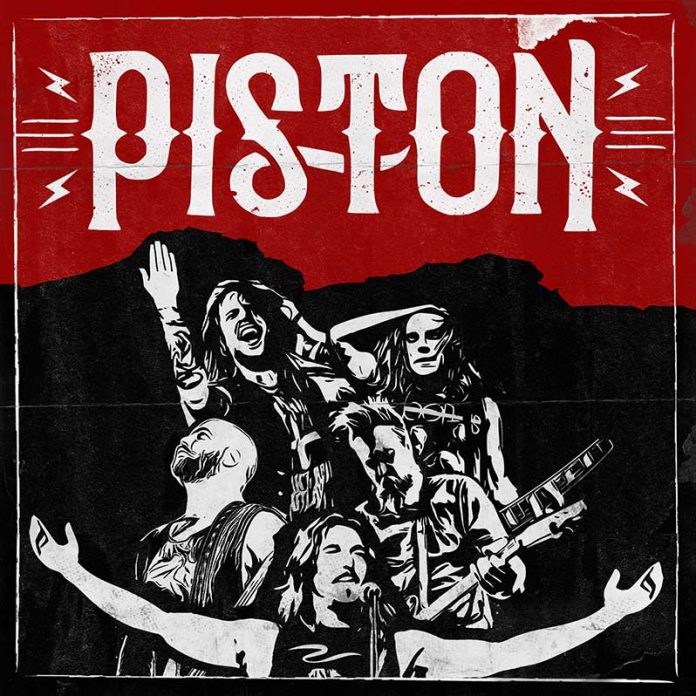 Not for nothing, I am guessing, does “Dynamite”  start with no preamble, no intro. Just the thought “come on, come on, tonight’s the night.”

“Piston,” says the press release that came with this, “will release their long awaited self-titled debut album on Friday 13th September 2019.”

An innocuous little sentence, that. But one that tells some of the story. Here’s another piece of the puzzle. Four years ago, give or take, I saw the Midlanders and wrote this: “Seeing Piston a few years ago and seeing them now is like seeing two different bands. It’s been a while since MVM caught the Staffs five piece and initial thoughts tonight are: blimey, they are much improved.”

Looking through the annals of all the different blogs I wrote that eventually became MV, it seems that Piston have been getting to this point for getting on for seven years.

“Long awaited”? Seven year itch, more like. This is getting towards “Chinese Democracy” levels of waiting, to be honest.

The good news, though, is two-fold.  First – being flippant – this is way, way better than “…Democracy”, and second – more sensibly – if they were “much improved” that night in 2015, here they stand ready to join the big leagues.

The 10 songs here – a couple of them are remixed for bonus tracks – are polished, and absolutely ready to shine. On one of them (the third one to be precise), “Go Now”, Rob Angelico – from memory the only one of the five not from the Midlands – sings this: “we’re gonna party like its ‘89”.

Now, yeah, fair do’s there’s some of that here, course there is. But there is more too. Not least of which “Go Now” itself, which finds some brilliant middle ground that you never existed between the primal blues of The Bonnevilles and the UK Southern rock flavour of Bad Touch.

“Rainmaker” is the single. The one, with the dirty bass groove, the one with the swagger, the one where the front man’s hips are going to sway, and fists are going in the air when the anthemic chorus hits.

This type of hard rock always lived on a couple of ballads. Piston know that, they know their history. They are familiar with The Black Crowes debut too, if “Carry Us Home” is any guide.

The absolute highlight, here, though, is “One More Day” which to all intents and purposes takes The Cult’s “Sonic Temple era” and updates it, while the drums of Brad Newlands propel “Beyond Repair” along, and the superb slide guitar of Jack Edwards and Luke Allatt (who are mighty throughout, but particularly so here) ensures that “Leave If You Dare” sounds like more of a threat than it might.

If Piston had been around 30 years ago, they’d have had to fend off tedious “the new LA Guns” tags, that name might not have the resonance it once did, but still, Tracii and Phil would be proud of “Blow It Away” and bass man Stuart Egan clearly enjoys himself here.

A lot of these could be anthems. If they are, then “Let Us Rise”, which offers the suggestion: “work is so overrated!” is mine, and “Into The Night” with its angular guitar line and rather energetic pulse, ends the album proper in a way that is different to what has gone before

If the term “classic rock” can sometimes signify something retro, then it doesn’t here. There are elements of the greats here, but your heroes are Piston’s too. What Piston have done, though, is skilfully mould that into something fresh and new. And if they don’t take seven years to get the net one out, they could be at the start of something here.