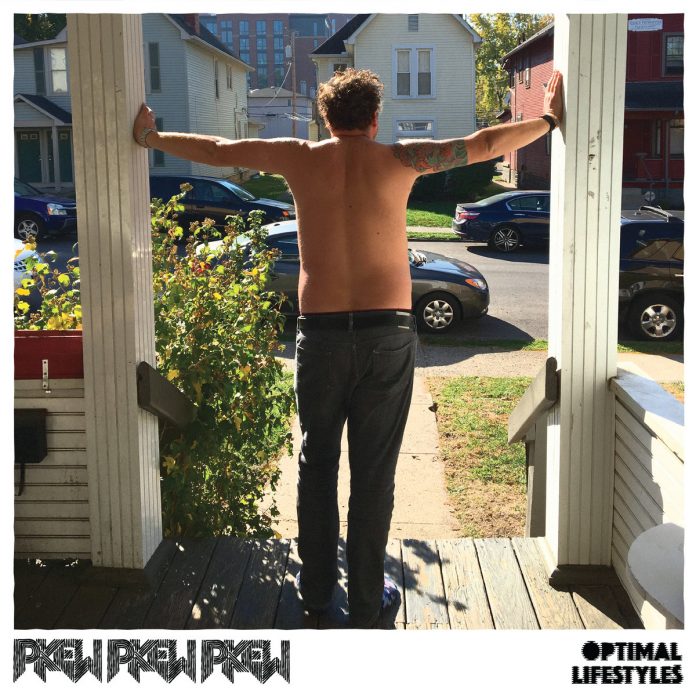 “I hope you got down early enough to see Pkew Pkew Pkew” says The Hold Steady’s Craig Finn towards the end of their incendiary set in London last weekend. “If we have a little brother band, its them…..”

Hands up here. I’d never heard of them before 8pm that night, when four Canadian’s strode out onto the stage. By 8.30pm, I was scrolling through my phone contacts for the most likely people to tell, “mate, you’ve got to check out……”

Even better It turned out that they’d literally just the week before stuck out their second record “Optimal Lifestyles” and even even better (if you will) it basically distilled everything they’d done on stage for half an hour into 35 minutes and 15 glorious songs.

They thunder out of the blocks. They are like a four-year-old and a two-day Sunny Delight bender. “Still Hanging Out After All These Years” sets more than the tone. What it does is lay out all the ethos here: lets get hanging….

This is a party that doesn’t end. Well kinda. It’s a party with many subtleties, actually. “It Don’t Matter At All” has a kind of The Strokes type tone, but for all the happy go lucky sound – the lyrics frequently hide some deep sadness. “every now and then I get reminded, that I don’t really matter at all” is a powerful hook here – but good god, they’ve all got hooks.

“Point Blank” does more in 90 seconds – including a saxophone solo that is straight off E-Street – than many bands do in a career. But PPP are really skilled songwriters too. “there is a hole in my heart that’s the size of a bottle, and I like to fill it everyday” is a reminder perhaps, that the hedonism has consequences, but still that’s a line on “Drinkin’ Days”. You can, if you prefer just enjoy that the thing has a Thin Lizzy-esque guitar solo, its up to you.

“65 Nickels” has the energy and the blue-collar intent of early Gaslight Anthem, and the outright brilliance of the chugging “The Polynesian” is basically a rock n roll masterclass – wrapped around a story that all touring bands will probably relate to.

“Skate 2” is another example of the multi-vocalist approach that recalls the wonderful Honeycrack, and there is something of that mid-90s stuff about a lot of this, too. “Passed Out” will strike a chord with those who “waste their lives away on a job that I hate” (saying nothing here in case my boss reads this….) and those who overthink “the only one torturing me is myself” (again saying nothing….) and the way the latter chorus soars suggests that these boys know arena rock as well.

There is, though, something gleeful even in the misery here. “Mt Alb” is furious about something,  while “The Pit” hides something unsettling in its story. “I Wanna See A Wolf” is an example of the fact, perhaps, that PPP have a touch of the off-kilter about them, and “Adult Party” has probably the finest opening line of any song so far this year: “no one shakes hands anymore, its all hugging” and yeah, preach, brother. And the disdain in the chorus of “split a six pack and get to bed early” is only matched by the chanted: “rich kids go fuck yourselves, if there’s some in the audience, go somewhere else….” And you just know they’ve given themselves a focal point at all future gigs.

“Thirsty And Humble” manages to name-check Red Dead Redemption and still offer the thought that “I’ve drank six beers and I’ve got 28 bucks. And when I go out tonight I ain’t giving no fucks.”

And that’s kinda why Finn is right, and the thing about little brothers, is they don’t need to ask permission and they grow up fast. See, if The Hold Steady were from a scene where it got druggy and the kids they seemed to skinny, as it were, then Pkew Pkew Pkew definitely have every reason to stay positive, you might say. Their lifestyles might just have to change, because the guys named after gunshots have gone off with a big bang here.