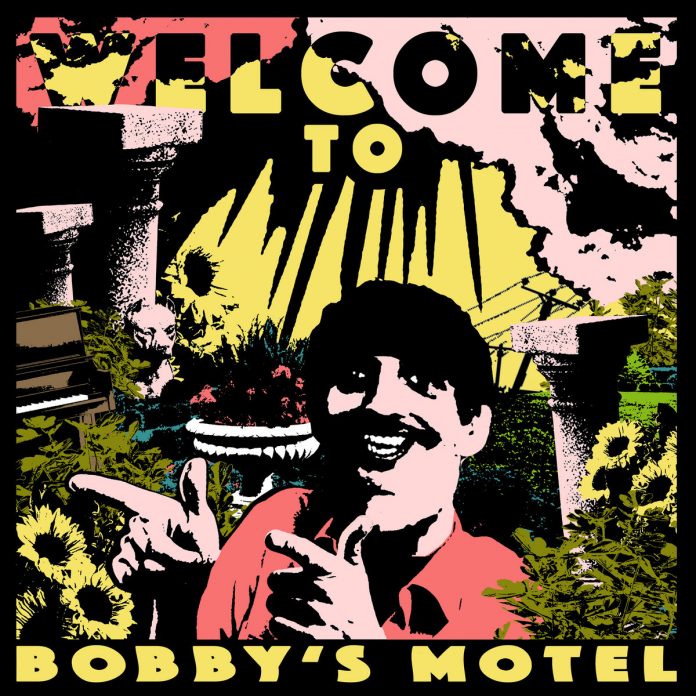 I hadn`t heard of Montreal based indie / alternative quintet Pottery and on first listen I thought maybe this isn`t for me but reading that last year they toured with Parquet Courts, Thee Oh Sees and Fontaines D.C. and had played festivals including Green Man, End of the Road and The Great Escape, I thought maybe I’d give them another listen. I`m glad I did. Their debut album “Welcome To Bobby`s Motel” is indeed a celebration of rhythm and groove.

The album opens with the title track `Welcome To Bobby`s Motel` and is just under two minutes of musical mayhem, a sort of mini advert or taster of what`s to come. `Hot Heater` kind of staggered along, a sort of off kilter Talking Heads before speeding up and off into a jumble of chugged bass, jangly guitars, and odd synth riffs, nicely funky. We even get an opportunity to sing along towards the end as the song departs to allow the drums and high hat to shine with some chanted vocals including the song title itself.

There`s a quirkier affair with the stop start `Under The Wires` which enjoys some interesting synth flourishes and sharp drum and bass. I felt `Bobby`s Forecast` had a more a seventies soul vibe and really reminded me of the English post-punk band A Certain Ratio. A track that could have come straight out of a seventies blaxploitation movie like Shaft or Super Fly.

`Down In The Dumps` is again another stop start groovy offering. There`s some great drumming from Paul Jacobs throughout. We get a change of pace with `Reflection` which seems to be just that, a reflective gentle piece with some pleasant synth colourings added by Peter Baylis and some sedate vocals from Austin Boylan.

The funky `Texas Drums Pt I & II` runs at over six minutes in length and seems to be divided into two sections, as the first part has vocals and the later not. The lyrics of “All my best friends moved to Texas, All My best friends play those drums, All my best friends pick up drumsticks, All my best friends bang those drums” followed by “Won`t you play those funky drums for me” is really hypnotic before half way through a nigh on jam session takes over with some guitar riffs and feedback shared by Jacob Shepansky. The fast paced `NY Inn` follows, held together with the pounding bass of Tom Gould.

`What`s In Fashion? ` is very idiosyncratic with some nice hooks and the lyric “What`s In Fashion?” almost warbled repeatedly throughout this melodic ode. The rapid-fire drumming and incessant non-stop guitar in `Take Your Time` brought to mind classics such as the Au Pairs `It`s Obvious` and Gang Of Four`s `Damaged Goods` but sung by Devo!! The song is about the darker side of drugs, the repeated use of the title “Take Your Time” became quite hypnotic and almost subliminal.

`Hot Like Jungle` closes the album and it`s a love song, written for drummer Paul`s girlfriend. A laid-back mellow tune with synth inflections midway and towards the end.

“Welcome To Bobby`s Motel” has at it`s heart a funk-dance-rock style about it, sort of art rock. Pottery`s sound seems in turmoil, chaotic and ramshackle at times but they have a wonderful buzz, energy, eccentric and unconventional frenzy about them. Unlike The Eagles Hotel California at Bobby`s Motel…you can check out at any time, but you won`t want to leave.